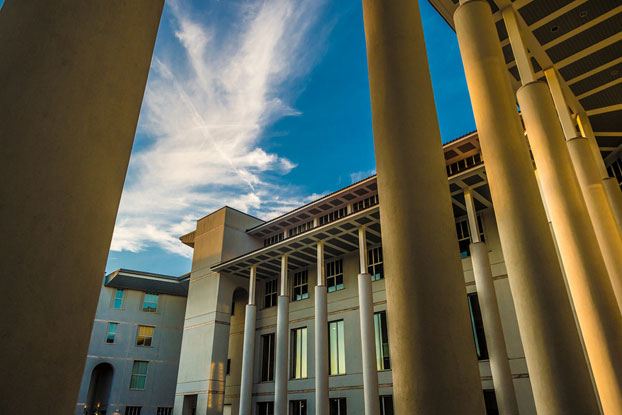 In the span of the Leadership Coaching Fellows Program at Goizueta Business School, Thomas witnessed what he described as the evolution of a team. To get a sense of a baseline of a given group, Thomas asked students how they would assess common situations a leader in a given business encounters regularly.

“In the beginning, there were long periods of silence, because they didn’t know themselves as leaders, or their teams,” said Thomas, a second-year Goizueta MBA student who coaches first-year MBA peers.

“Then there’s this waterfall moment when everyone is chiming in.”

Thomas has worked with two teams, one each semester, in the program that’s designed to help students become more aware of leadership and develop a skill set. Another second-year student and coach, Courtland Seeger, said coaches are given diagnostic tools to pass on to the first-year students in order to analyze their team’s functionality and make necessary corrections.

“I certainly learned to be a lot less prescriptive,” Thomas said. “I had a natural inclination to give a solution, and I had to really learn to be a facilitator.”

He realized he needed to create a dialogue and ask questions of his teams, and not give direct answers immediately. Other skill development includes learning interpersonal skills and the ability to assess a situation, or team member, from a psychological perspective.

Seeger said he tries to insert himself into a team’s environment only to make them more conscious of fundamental characteristics when working together, such as showing up on time, or rescheduling a meeting.

Any mistakes or corrections learned from the first semester were quickly applied to the second semester, which helped the second team develop at an accelerated pace, Seeger said.

While some students use the opportunity to network and search for a career path, Thomas runs his own non-profit organization, and plans to after graduation from Goizueta.

“For me it was not as much about building hard skills, as growing soft skills and building a team,” he said.

Seeger plans to pursue a career in management consulting, which is the epitome of working in teams, but he said any career path is warranted for building teamwork skills, especially for moving up in a company.

Not only is the program voluntary, there is no class credit available, and that’s why Thomas calls it almost extra-curricular. Students appreciate it as a resource should they need it, as Thomas added that some students performed at a high level on their own.

“It gives them exposure to professional resources, and access to deans with experience in these business settings,” he said. “It’s humbling what it’s teaching you because you will soon be managing a team and won’t have the luxury to try it on-the-job or have peer appraisals.”

As a coach, the second-year students receive personalized coaching from an executive coach and learn from other leaders’ experiences.

Seeger admitted that, by the end of his first year, he didn’t think his team worked well together. But this program gives students a chance to reflect on how that team played out and his second year, therefore, has been very smooth.

“If you have any plans of being successful in your future, it’s going to require you work with teams and work successfully in teams,” Seeger said.

Notes on Finding the Right MBA