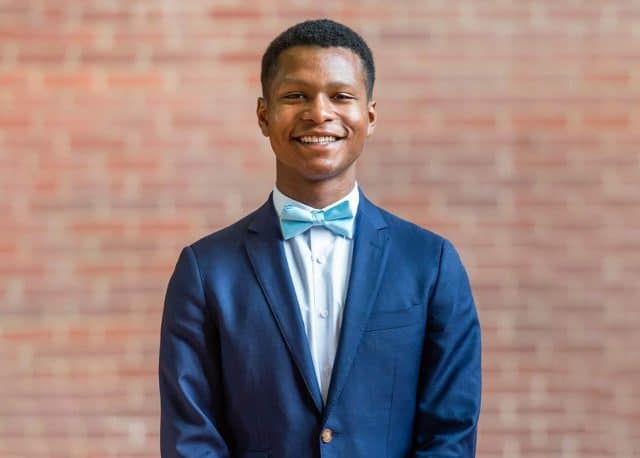 Julian Portis-Escoto 23BBA grew up in Washington, D.C., but has always considered Atlanta his second home.

Portis-Escoto spent numerous summers visiting family in Atlanta and dreamed of attending Emory University due to its medium-size and easy access to the city.

“I was interested in studying finance, and Goizueta Business School is the place to be for that,” he says, though he plans to graduate with an area depth in marketing. “Beyond that, I love going to concerts, and Atlanta is one of the best places to do that.”

Portis-Escoto has been a singer since he was in the fourth grade. Music has been a thread in his life since then, though he admits that it became even more important to him during the pandemic.

The pandemic really made me realize how short life can be. While we’re going through life, we might as well do something we love, something we care a lot about.

“Music is a part of my life and how I’ve made some of my greatest friends. It’s been there with me every step of the way.”

It was also during this time that Portis-Escoto took a deep dive into the world of music business, uncovering his career, he says.

After graduation in May, Portis-Escoto is unsure about whether he wants to attend graduate school right away, but he’s absolutely certain he will follow a road that leads the music industry.

He’s already gotten started by interning with Pulse Music Group, a Los-Angeles-based music publisher. Despite the internship being remote, Portis-Escoto had the opportunity to travel to L.A. and meet with the team—and a few artists—in person.

“I actually found out about Pulse through an Emory alumni,” he says. “It’s been really fun to do my schoolwork, while also networking and learning more through my internship experiences.”

Fostering a Passion for Music

Another outlet for his music passion has been his involvement in the all-male A Cappella group at Emory University, No Strings Attached. Portis-Escoto started as a freshman and says it was the first group he joined as a college student…now he’s the group’s music director.

“It’s a really great community,” he says. “Music is my first love, and singing is something I enjoy doing a lot. So to come a couple of times a week and hang out with guys who also share that same enthusiasm for singing, it’s served as a great escape for when life is a bit more stressful.”

As for his leadership role within the group, Portis-Escoto says it was something he fell into, but it’s a position he enjoys. He provides general singing advice, keeps everyone on track and on schedule, and finds the sheet music for the group to choose from.

“As far as leadership goes, I feel like some of it has come naturally, but No Strings Attached is definitely a great group of guys, and I’ve loved everything about it.”

The Power of Network and Scholarship

Portis-Escoto credits many factors to his success at Emory: his academic advisor for steering him towards classes that best fit his passions; his professors for fostering an educational excitement in him to pursue music business as a career; his brothers at Sigma Alpha Mu; his friends in No Strings Attached; his student work opportunities that have taught him the art of work-life balance; and his scholarships.

Without the financial awards he’s been given, Portis-Escoto says he wouldn’t have been able to attend Emory.

“Emory is a great school, and I’m thankful for the experience to attend. I’m trying to make the most of it,” he says. “These scholarships have been a very fortunate thing that I’ve been blessed to receive. They’re not anything I take for granted.”

Through the guidance of his financial aid advisor, Whitney Tucker-Jenkins, any semester that began with a personal or family roadblock to paying his tuition was met with a reevaluation of his merit- and activity-based scholarships and financial aid package.

My scholarships have allowed me to really enjoy my life at Emory without stressing about financials. It’s not a lot of work on my end because the school handles it for me.

It was also through scholarship funding that Portis-Escoto was able to spend the spring semester of his junior year in Madrid, Spain. Thanks to the generous support of others, Portis-Escoto says the time spent abroad changed his life and forced him to grow as a person.

“It was a really amazing experience that I wouldn’t have been able to do if it wasn’t for my scholarships.”

At Goizueta, students come first. The cost of pursuing an undergraduate, graduate, or PhD degree is a significant investment—one that can be a prohibitive obstacle for many. Your support of scholarships helps us attract and retain top students and improve the diversity and talent of our student body. Give today!