Citigroup Inc. made headlines early in the week with a dramatic raise in stock price. But, according to various reports, there was no monetary gain for investors.

The Wall Street Journal reported the jump marks the first time the stock traded above $40 since 2007 — before Citi took on government support.

The leap comes thanks to a reverse split.

“Citigroup was able to ax a huge number of shares outstanding by turning every 10 shares into a single share,” writes Matt Phillips and Randall Smith in The Wall Street Journal. “Instead of trading for less than $5 a share, where Citigroup has languished despite improvements in profits and capital, the New York financial behemoth instantly became a $40 stock.”

Reverse splits have mixed results, says Goizueta’s James Rosenfeld, an associate professor of finance. He told Maria Aspan of Reuters late last week — ahead of the split — the move is designed to assist growth.

“It’s sort of a quick fix,” he said. “(It) tells me that they’re not confident they can grow themselves out of that $4 range.” 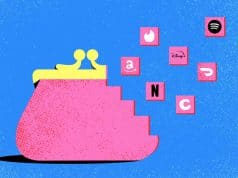 “Your Wallet Is Being Drained by Subscriptions. Wall Street Thanks You.” The Wall Street Journal