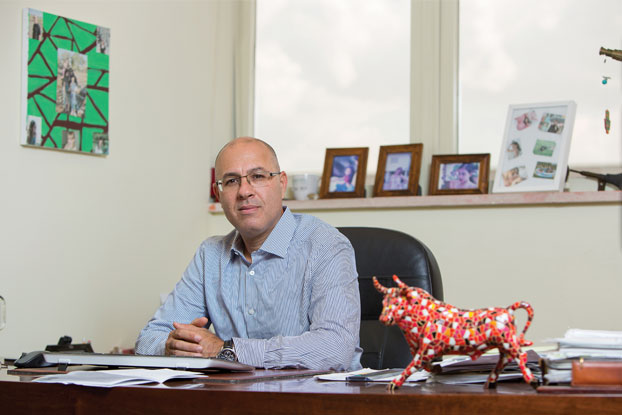 Gadi Netzer 98MBA is not averse to risk—either in his personal life or his professional life. After all, Netzer was already past age 30, with a wife and his first baby on the way, when he left his native Israel—and a well-paying job with Unilever—for Emory, where he committed himself to furthering his career by taking on Goizueta’s high-intensity, one-year MBA program.

Soon after graduation, he took another bold step, helping launch a company in Israel that he and his partners called Globrands—an importer and distributor that aimed to carve out market share not only in the tobacco market (the company’s founders all previously worked at Japan Tobacco International) but beyond. The company was a success from the start and enjoyed strong early growth. But just over five years later, Globrands almost completely reinvented itself—a move that Netzer recognized as both deeply risky and entirely necessary.

Today, the company is one of the major players in its marketplace, serving multinational companies such as Japan Tobacco International, British American Tobacco, Wrigley, and more, and Netzer serves as its CEO. Recently, he spoke with Emory Business about the company, his experience in Atlanta, and the challenges ahead.

EB: Your company, Globrands, was launched under a wholesale model. But a few years later, you made a strategic decision to build your own distribution company. What drove that decision?

Netzer: In 2006 we realized we could no longer get the wholesalers to work the way we needed them to. We looked at ourselves as an international company, so we knew we needed to have the highest of standards—and that included our wholesalers, who were essentially our people on the ground. So we decided to create our own distribution company, with the idea that we would finally be able to manage our on-the-ground people the way we believed they needed to be managed. The company was not that big at the time, and it was a huge risk. But we believed that transition would enable us to significantly grow the business. And we did grow. It wasn’t an easy year, but we did it. It brought us to a different place.

EB: With that move, you greatly enhanced your market share and, as you say, reached a different place in the marketplace. What are the challenges you see, then, going forward?

Netzer: There are a few, I think. First, we need to figure out how to keep growing, because it’s much more difficult to maintain the kind of growth we’ve had when you’re already big. Second, we need to maintain our relationships with our multinational suppliers. When you are representing multinational firms, your level of service has to be the very best. Your sales force, your training, everything needs to be at the top, or those clients will look for other relationships. Finally, the reality is that we are working in a declining market. Tobacco is declining, and in a declining market, you have two options: You can either say, “Oh well, we’re on the decline,” or you can say, “OK, let’s respond by increasing our market share and/or our business base.” It’s about determination and being very clear with your goals.

EB: What drew you to Goizueta? And how was your experience?

Netzer: The most important thing at the start was the one-year program. I was over 30 already and didn’t want to spend too much time out of the workforce. But after being there, I came to understand [the one-year program] really isn’t the number one reason to go to Emory. Rather, Emory itself is the reason. It has a wonderful atmosphere. It’s very different than going to school in Israel. In some academic institutions you can feel like a number. But Emory was small and intimate, and I got a really great education. When I went there, I had a young wife and she was pregnant, and in those situations it’s not easy to make that kind of move and go to an entirely different place. But the whole atmosphere of Emory was such a help to us. EB: For our readers who aren’t familiar with Israel, how would you describe the business climatethere?
Netzer: I would describe it as similar to doing business in other developed markets. In a sense it’slike the United States and Western Europe—very developed, very sophisticated. One difference isthat it’s more aggressive. It’s a very competitive market. It’s high-tech oriented and everything needsto be here and now—that’s part of the culture. You have to be ready to implement changes on shortnotice, because the market evolves very quickly. There is no downtime here. In Europe, they’ve been doing business for hundreds of years. Here it’s all new. We need to be able to do things at a pace thatmight make other people dizzy. But that’s just how it is. —Tim Hyland