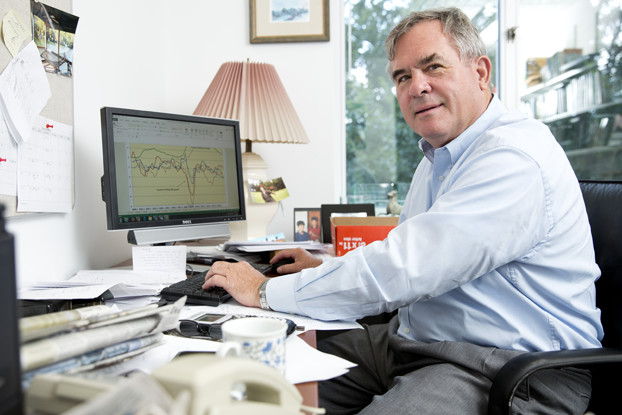 In each issue of Emory Business magazine, the staff invites faculty or staff members — current or retired — to have some coffee. The mission is to gather insights and perspective on a topic of interest to alumni and friends of Goizueta Business School. Since it can’t all fit in the print publication, we reserve a few for web-only view. Enjoy!

Taking the plunge and diving into unknown waters is par for the course to Ray Hill. As a young academic, he advised on economic policy in Washington while teaching, eventually being lured away from Princeton University to take on the then-uncharted territory of investment banking in China and broader Asia. Now a senior lecturer in finance at Goizueta, Hill shares his wealth of experience as a former executive for Lehman Brothers and Mirant (now GenOn Energy Holdings) to reshape the way MBA students solve problems. Hill calls this approach “the economist way of thinking.”

“My job is to get my students to think a certain way—an economics way,” says Hill. “This does not mean that they can’t think in another way, but my job is to teach them to filter problems through the lens of economics.”

For example, take the recent policy discussion on raising the minimum wage. While some people will be helped by such a measure, others will be harmed. “The economist way of thinking is to ask, ‘Is this an effective way of increasing income for people whose income is very low?’” Hill says. “The answer is no, because most of the people who are going to get a rise in their wages are not poor. A second question to ask is, ‘Who was not in the room when the decision was being made?’ In other words, who is getting hurt? In this case, people who have poor educational backgrounds or lack skills or work experience. A higher minimum wage makes it more likely that employers won’t want to hire them and that they will never be integrated into the labor force.”

Hill says the economics viewpoint aims to get the facts and logic correct, thereby allowing for a useful debate about values—where there is not necessarily one right answer.

“A person can say, ‘I don’t care about the facts; I am in favor of raising the minimum wage because it will help many people.’ But an economist would say, ‘That’s fine, just know you are hurting the most vulnerable people in society.’”

Consider the discussion during the recession of repeatedly extending unemployment benefits. There were politicians who wanted to curtail this practice, arguing that continuing the benefits would extend the level of unemployment even more, while other politicians denied that the extension would keep the unemployment rate higher.

This debate missed the point, says Hill. “Of course extending benefits raises the unemployment rate, since it increases the incentive to stay out of work longer while searching for another job.  The debate should have been about how much the government should help people who lose their jobs as the result of a very bad recession—regardless of the effect on the unemployment rate,” explains Hill. “We need to understand the economic consequences of a course of action, but that doesn’t mean that economics tells us what to do when we need to make value judgments.”

In addition, economists factor in the way people pursue their self-interests and how this impacts the possible outcome. “Economics can be a moral tool,” notes Hill. “The economist is basically driven by this mode of thinking about people pursuing their self-interest. That’s why, before we start talking about how desirable some public policy initiative is, an economist’s instinct is to have everybody declare their self-interest in this policy. Then we can have an honest and transparent debate about whether this policy actually serves the public good rather than serving some special interest group.”

This same framework of separating facts and logic from values applies in a business context.  For example, any discussion of business strategy involves subjective judgments about the risk and reward of alternatives, where there usually isn’t a single right answer. To have a productive discussion about strategic alternatives, it is important to clearly distinguish conclusions based on subjective value judgments from conclusions that are driven by facts and logic.

“I may have a different tolerance than my colleagues for the risk of, say, expanding the business, but we should all have a common understanding of how we are quantifying the potential downside or upside of the alternatives,” says Hill. “We all have a tendency to hide our subjective judgments behind a set of numbers rather than laying them out for debate. My aim is to present real-world, contentious issues in the classroom in a way that illustrates the usefulness of keeping value judgments separate from questions that can be answered by facts and logic.