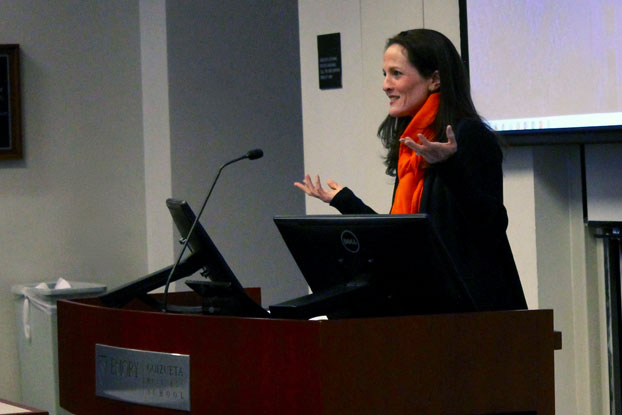 “When I was in college, my dream was to be an accountant.”

The audience was laughing, but Rebecca Ginzburg 94BBA wasn’t joking. When she was a high school senior, she overheard a family friend mention the chief financial officer of Blockbuster made $1 million a year.

“I was like, ‘Oh! I think I’m going to be an accountant,’” said Ginzburg, speaking to a room full of Goizueta students in an event hosted by the Alternative Investments Group and Goizueta Women in Finance.

She enrolled at Emory and declared an accounting major so she could take her CPA exam during college. Then, just before graduating in 1994, she learned she passed only three of four parts on the test.

“I had never failed anything my entire life,” she said.

Not long after, finance professor Nicholas Valerio told her she should move to New York and get a job on Wall Street. “I was like, ‘I’m from Florida! I don’t know where Wall Street is,’” she said.

Two decades later, Ginzburg is the Chief Operating Officer and Chief Financial Officer of Junto Capital, a $1.2-billion hedge fund sponsor on Madison Avenue. The firm just signed a 10-year lease and is on track to hit 20 employees by year’s end. She started building Junto in 2013 after spending 13 years at Viking Global Investors, during which time she was an analyst and then led the Marketing/Investor Relations Group.

She’s learned a thing or two along the way. For example, now she sees failure as a tool.

“You will have failures, and they could be huge,” she said. “But you can recover. You just have to have a plan.”

That may sound easier said than done, but Ginzburg had some practical advice for students embarking on their careers, notably…