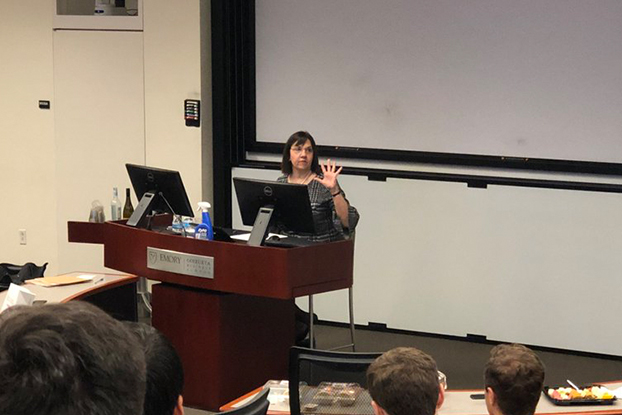 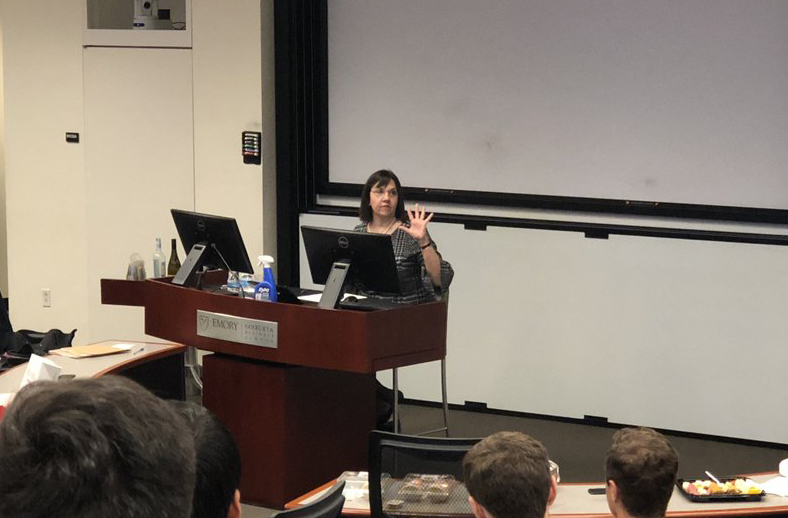 The members of the Federal Energy Regulatory Commission are not exactly household names.

They also don’t come with many shared experiences as, say, The Beatles. As Cheryl LaFleur said during a recent visit to the Goizueta Business School, FERC is more like The Monkees or the Spice Girls.

“We’re all chosen individually, and they say, ‘Go be a board, go be a commission,’” she said. “Even though you might not have ever met any of these four people. Go figure it out. It’s a work in progress right now, to be honest.”

LaFleur visited after an invitation from Ray Hill, senior lecturer in finance, who she first met in 1972 as a college freshman at Princeton University when he was LaFleur’s resident advisor.

During an introduction before the Energy Markets Club and other Emory students and alumni, Hill said LaFleur’s visit came in the midst of a most interesting time in regards to energy policy, as there are theories and factions that have widely divergent views on what energy should be in the United States, and how it should be supplied.

“When you ask people about Cheryl, whether they’re Republican or Democrat, ‘She’s the reasonable person on the Federal Energy Regulatory Commission,’” Hill said. “But she’s caught between a lot of people who are often unreasonable, that’s why she has a lot to offer here.”

LaFleur explained that FERC is an independent agency structured like other independent agencies, such as the Federal Communications Commission, or the Securities and Exchange Commission. It has five members who are independent presidential appointees confirmed by the U.S. Senate. LaFleur was nominated to her first five-year term by President Barack Obama in 2010.

By law, the group is bipartisan, and LaFleur said, generally, three members are from the president’s party, two are from the other party.

“A little bit less so recently, but generally bipartisan in practice, too,” said LaFleur, who is the only Obama holdover. “Traditionally, we’ve been technicrats. We’ve been put on there because we know something about energy, hopefully, and we’re going to try to be as apolitical as we can with these technical decisions.”

LaFleur previously worked for more than 20 years in the electric and natural gas industry, where she was executive vice president and acting CEO of National Grid USA, responsible for the delivery of electricity to 3.4 million customers in the Northeast. LaFleur began her career as an attorney, and she holds degrees from Harvard Law School and Princeton.

“The electric sector, how we get our energy, especially electricity, but other forms of energy in this country, is in the middle of a significant transformation,” she said. “We really are going through great change in where we make our electricity. From a system that was primarily based on coal and nuclear central station regulated power plants, to the system we’re transitioning to now.”

LaFleur outlined that there are three big drivers of that change: An increased availability and affordability of domestic natural gas, which makes gas roughly a quarter of what it cost in 1990; the proliferation of new technologies and distributed resources spurred by tax policies for renewables; and the increased understanding of environmental consequences of making and using energies, especially climate change.

There’s a change both in the way people use, and make, electricity. Climate change, for example, was not a driver when the current grid was put up but is a substantial driver now.

“This is really a dominant issue for people working in energy now,” she said. “How are we going to adapt the system we have for the climate change reality that’s coming.”

There are many ways of addressing climate change that would be readily compatible with a market-based economy and energy economics, like a carbon tax, or a national goal of cap and trade. But the country remains deeply divided over the existence of climate change, LaFleur said, let alone what goals should be if it’s addressed at all.

There’s also been a major push to build new natural gas pipelines. However, there are people opposed to natural gas who are conducting hunger strikes outside FERC.

Recently, FERC announced that, for the first time in 20 years, it would take a fresh look at how it considers gas pipelines.

“I’m trying to play the long game, and I think this is ripe for review,” she said. “To look at how we decide to build a gas pipeline in this country.”

“Why is consumer confidence on the rise?” 11Alive News