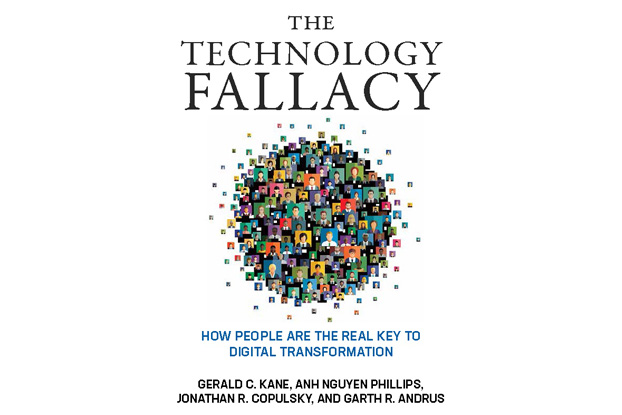 The coronavirus pandemic has forced organizations across the globe into a massive experiment. With little lead time and differing degrees of preparedness, business has gone digital. Though he believes the lessons learned from shifting a workforce from in-house to distributed will pale in comparison to the lives lost and the economic damage done, Gerald Kane 98MDiv 06PhD said many of these “emergency changes” contain a silver lining.

Kane, professor of information systems at Boston College, faculty director of the Edmund H. Shea Jr. Center for Entrepreneurship at the Carroll School of Management and coauthor of The Technology Fallacy: How People are the Real Key to Digital Transformation (MIT Press, 2019), fears that when the pandemic passes, companies will abandon any technological progress made and return to their old ways. Kane’s hope is that company leadership will pause for “critical reflection” and consider which innovations they should keep once the coronavirus pandemic is a thing of the past.

In the book, Kane and his coauthors (researchers from Deloitte Consulting LLP) recall the eruption of Icelandic volcano Eyjafjallajökull in the spring of 2010. The ash cloud rose nearly six miles into the sky, halting airline travel in western and northern Europe for several days and disrupting flights for weeks. Customer call centers at KLM, the Netherlands’ main airline, were overwhelmed. Throngs of customers who couldn’t reach KLM by phone began to communicate with the company via Facebook and Twitter. KLM responded in kind, launching a social media response not only from customer service but from other parts of the organization as well, such as marketing and sales. KLM’s emergency social media effort was wildly successful, but it didn’t stop the airline from sliding back into its departmental silos as soon as the ash cloud lifted.

But Peter Hartmaman, KLM’s CEO at the time, pushed back. He decided the company was on to something and moved to formalize KLM’s “emergency” social media strategy. “It was a proof of concept experiment that needed to be systematized,” explained Kane. “As I’ve studied digital collaboration, one of my great frustrations is how there are much better ways to do things, but people still rely on email and phone calls.”

What separates a digitally mature company from an early-stage company, says Kane, isn’t the willingness to experiment with digital technologies, it’s the willingness to “lock in the learning.” In doing their research, the authors found that the digitally mature companies were more likely to be collaborative. “And the barriers to collaboration are more likely to be cultural rather than technological,” Kane explained.

Interview with The Boston College Libraries

According to Kane, it starts with leadership. Leaders need to figure out how best to align a company’s culture, people, structure and tasks and utilize technology where and when it makes sense. Kane sees companies making “emergency progress” on several of these fronts now. “In terms of opportunities for business to move forward in the 21st century, this [pandemic] is a real kick-in-the-butt wake up call,” said Kane. “The digitally mature companies are going to use this to drive change in their organizations so they’re more resilient for the future.”

Kane thinks we might see a more diverse and robust “Golden Age of Collaboration” on the other side of the pandemic—including a reckoning regarding what activities can be done online and what things really benefit from face-to-face interaction. Additionally, many “stay-at-home” employees are experiencing what Kane has dubbed “slack time.” Some are using it to beef up business skills, others are learning new languages, some are using it to be still and think. Kane believes organizations would serve themselves well by continuing to create slack time for their employees.

“As the world becomes more digital, we can design it in certain ways,” Kane said. “How do we create a healthy environment rather than one that exploits its participants and its workers? It’s the reflection that companies are going to need to do as they start thinking of themselves as technology companies.”

Kane believes transformation is possible. He was at Goizueta during the dot-com bust. He remembers that the prevailing worldview was “the whole internet thing” had been a flash in the pan. “But at Goizueta, we were thinking ahead and figuring out what essentials would be crucial at that time,” Kane recalled of his professors and advisors. “My training at Emory really set up the worldview I have today.” Currently on sabbatical, Kane is working on a follow up to The Technology Fallacy. The new book will elaborate on the same themes but will include exercises on how companies can actualize and systematize digital maturity and profiles in digital leadership.

Erika Hall on expanding the pie