The MBA student believed his classmates could gain real-world experience through a consulting competition. This, according to McSweeney, would also strengthen ties with Emory’s business school and a growing Atlanta business community.

Goizueta wouldn’t be “Goizueta” for another three years, but the Goizueta Marketing Strategy Consultancy (GMSC) was starting to take shape.

McSweeney worked with marketing professor Atul Parvatiyar and other students to organize the Emory Marketing Association “marketing competition.” The first year,  nine companies signed on to hire first-year MBA students as consultants. Their projects were judged at the end of the semester and firms walked away with valuable insight on marketing problems.

“It was a great day; I was really proud of all the people that worked so hard to get the thing off the ground,” McSweeney said recently in an interview commemorating the 20th anniversary of what would later become GMSC.”

The program will celebrate its 20th anniversary May 5 in a full day of events at Goizueta Business School. Students will present — and be judged — on projects they’ve worked on since January. Judges will also hear from keynote speaker Ted Woehrle, CMO of Newell Rubbermaid

Parvatiyar, now CEO of the Institute for Customer Relationship Management, said competition between students was the unique aspect that made GMSC different from other student projects.

“The fact it was a competitive activity brought out the best in the students,” he said. “Also, for the companies it became a competitive activity for them. We had three levels of involvement — students, participating companies and executives and then we had a whole group of people who were out there to judge the competition… So the winning pride was extended beyond the students to the sponsoring executive.”

Reshma Shah, Assistant Professor in the Practice of Marketing, took over as GMSC advisor in 1997. She helped turn the student club into a full-credited class within the Marketing area in 1999, adding more instructor involvement. Shah meets with student teams weekly while other “team leaders” make sure projects are on target through the spring semester.

“Personally, it’s probably among the most rewarding and valuable things I’m doing,” she said, detailing some of the best moments of the past 13 years between companies looking for marketing strategies and students providing professional-quality work.

Shah adds “making an impact” is an important part of GMSC — for business and students.

“There is value to the students through their whole journey through Goizueta,” said Brian Mitchell, Associate Dean of the Full-Time MBA program, an alum and former GMSC client. “In itself, it is a unique differentiator for our program. So it’s one of the very few actual experiences that an MBA student can have that is not just hypothetical in nature, but very real in the sense that they have a real business problem…”

In the past, clients have contracted GMSC teams to validate work of other consulting projects or have relied on student teams to provide them with a full-service strategy taken directly to the marketplace.   All clients receive detailed analysis, recommendations and an implementation plan that rivals other consulting services.

The 20th anniversary, fittingly, has been themed “making an impact.” From current students back to McSweeney’s vision, it’s held true.

“I think GMSC is a program that you have to do,” said David Hart, a participant in last year’s competition and Director of Finance and Operation on the 2011 student leadership team. “GMSC provides you the opportunity to work on a complex business problem. Yes it’s rigorous, yes it takes a lot of time but the value added to your business school experience is so much more than the amount of time you put in.” 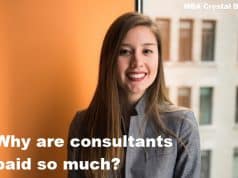