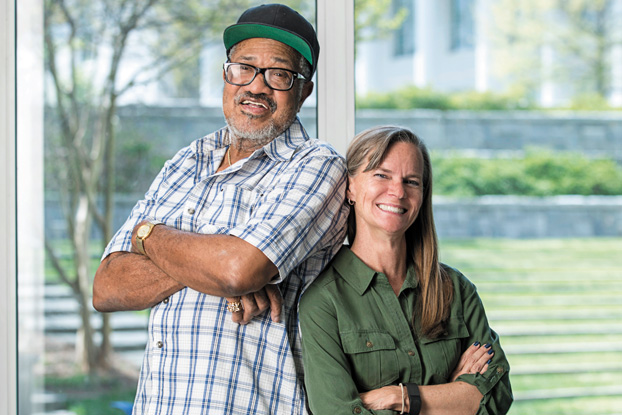 For more than 15 years, the unbeatable team of Joanna Green and James Freeman has served the Goizueta community, often in anonymity. Both Green, associate dean of finance and administration, and Freeman, a whatever-needs-to-be-done operations coordinator, are pursuing new paths: Green as a chief business officer for Emory’s Library and IT Services (LITS) and Freeman as a retiree—for the second time.

Q: So, who came to Emory first?

Freeman: I worked for Joanna’s predecessor, Charlotte Johnson, in the Rich Building, before the first building named after Mr. Goizueta was built.

Green: James has been here nearly 25 years, while I arrived about 19 years ago, shortly after Dean Tom Robertson.

Q: As the school grew, which period proved the most challenging?

Green: Definitely the years leading up to the building of the Goizueta Foundation Center. We had so many people and no place to put them. Dean Robertson worked to raise the school’s research profile, start the PhD Program, and grow executive education, all requiring more faculty, staff, and space. And that means more money.

Freeman: I have moved so many people I’ve lost count, from the Rich Building to leased space near Lenox Mall, then to the first Goizueta building, then to leased space around campus, and back to the new West Wing. Q: From erecting staging for an event to brewing coffee for the MBA Tuesday coffees, James is known for his willingness to handle any task. Was there ever a time he said no?

Green: Yes—when I asked him not to retire the first time. But he came back, didn’t he?

Freeman: I left for a minute and then came back.

Green: It was a painful minute! More like a year. Everyone got excited when James returned.

Q: James, you always seem to be here. What are your usual hours?

Freeman: I usually get to Goizueta at 5:30 a.m. But enjoyment of my work pushes me out of bed every morning.

Q: Do you go home and collapse after leaving at 2 p.m.?

Freeman: For a long time I ran a janitorial service, and I would clean churches in the Old National area. I’ve always had energy, so it was natural for me to leave one job and go to another.

Q: Joanna, you have three children; how did you juggle a demanding job with raising a family?

Green: I was lucky because my kids were pretty good. And James has children who have worked for Emory.

Freeman: My daughter Jamekia worked in IT services for Goizueta for a few years, and Kendra is a manager with Emory’s Department of Government and Community Affairs.

Q: What was your biggest laugh as a team?

Green: For the longest time it was James and I, with Roz Robinsson. Then we added Jonathan Yeomans, Tanya Cody, all got along, laughing the most about some of Roz’s or Mike’s shenanigans.

Q: What about when things were tense? How did you maintain the levity?

Green: We did some of our best work when under pressure. That’s part of what makes James (and the whole team) great. He’d help with anything. During the economic downturn, when we had to do as much with less, James would say, “Oh, I can take care of that.” And to be fair, everyone pitched in, rallying to get through those tough times and strengthening our community. That’s what I will miss the most.