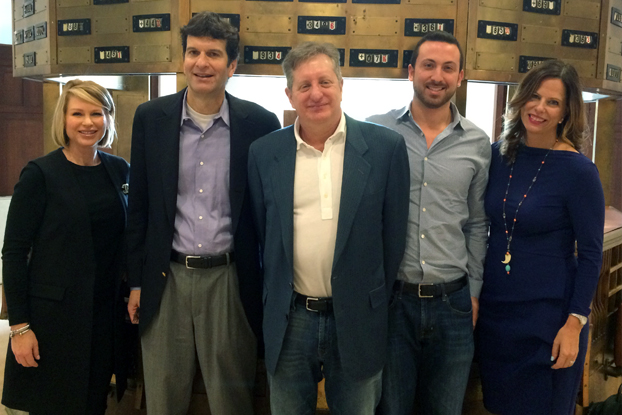 Steve Eisman’s name may not ring a bell, but if you’ve seen the Academy Award-winning movie The Big Short, which features a bravura performance by Steve Carrell as Mark Baum, a hedge fund manager who predicted the 2008 housing crash, then you know Eisman.

Or at least a thinly disguised portrayal of him.

Eisman’s name was changed to Baum for the movie, but he was the main character as himself in the best-selling Michael Lewis book upon which it was based. Eisman, who has carried his The Big Short fame into a well-regarded public speaking career, has remained heavily engaged in the U.S. financial sector. Since 2015 he has served as senior portfolio manager at Neuberger Berman.

In April, Eisman delivered the John Robson Lecture to two classes taught by Jeff Rosensweig, director of the John Robson Program for Business, Public Policy and Government. In a 45-minute address to 160 MBA students in Rosensweig’s Global Macroeconomic Perspectives course (plus an additional 30 minutes for audience questions) and in a similar course for BBA students, Eisman outlined his viewpoints on why the financial crisis of 2008 took place and what led to it, what’s happened since then and what could happen in the future with a new administration in Washington.

“What do you need for a financial crisis?” Eisman asked then quickly answered. “Too much leverage, a big asset class that blows up and structurally and institutional important firms that actually own the asset class. Unfortunately for planet Earth, we had all three.”

Throughout the presentation, Eisman’s  observations were tinged with a wry sense of humor that made his appearance equal parts entertaining and informative. Eisman explored a variety of subjects in detail, such as…

The psychological underpinnings of the financial crisis:

“Firms were making more money every year, because they were becoming more leveraged every year. And what was happening is that Wall Street executives mistook leverage for genius. If you had gone to any of these CEOs in 2006 and said ‘the entire paradigm on which you’ve based your career is wrong,’ the response they would have given is ‘I made $15 million last year, how much did you make?’”

The Fed’s work in picking up the pieces:

“Since 2011, Daniel Turullo [of the Federal Reserve, who resigned effective April 7], has had more power over the U.S. banking system than anyone since Alexander Hamilton. I sent him an email the other day and told him, ‘you are in my personal hall of fame of bank regulators and there is only one member.’ The banking system is safer today than it has been in anyone’s lifetime.”

“You hear that Dodd Frank is bad because banks aren’t lending. It’s a great argument. There is only one problem with it… it’s a lie. It’s definitely true that it’s harder to get a mortgage today than it used to be. But that’s not a Dodd Frank issue. That’s a J.P. Morgan was fined $20 billion during the financial crisis and they want to be super-careful issue.”

What will happen in the future:

“The Administration will probably not change Dodd Frank. It takes 60 votes in the Senate. The president will nominate someone new to the Fed and that person will have a more liberating position. Banks will be able to buy more of their own stock. Leverage levels will go up, but not close to where we have been.”

Eisman made his final observation in the form of encouragement to the students to challenge themselves.

“One of the most important things I’ve learned is my career is to figure out my paradigm,” he said. “What are the underlying assumptions of it that nobody questions? And then think outside those.”