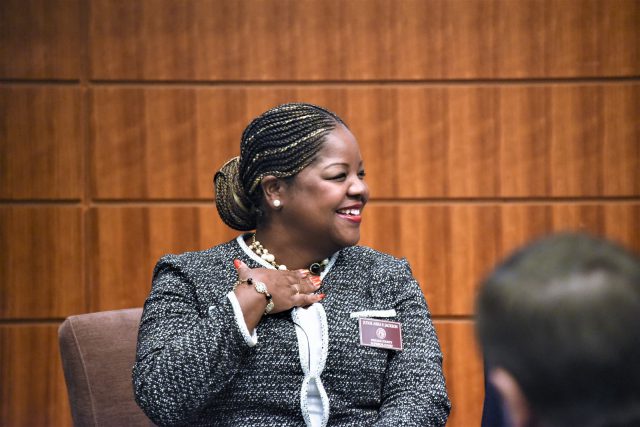 “We must come to see that the end we seek is a society at peace with itself, a society that can live with its conscience.”

Asha F. Jackson is not only the chief superior court judge for Dekalb County, she is also the founder of Project Pinnacle, a mandatory, year-long program for non-violent offenders under 25 years old.

“These are real people,” Jackson said of the participants in Project Pinnacle. “They’re not just numbers or statistics on my docket. They have really compelling stories. They’re talented. In some respects, they were misdirected, or never had resources to be able to learn how to take care of themselves and to navigate an educational system.”

Jackson was interviewed about Project Pinnacle and her perspective on Dr. King’s legacy by Carol E. Henderson, vice provost for diversity and inclusion, chief diversity officer and advisor to the president at Emory.

The program is now in its tenth year and continues to garner support from the community. Jackson said that word-of-mouth among community leaders who donated their services helped promote the project and expand its resources. Businesses and individuals began to approach Jackson to see what they could do to help. “It’s a ripple effect,” she said. “It’s been really incredible.”

“I love that,” Henderson commented, “Because what you’re demonstrating is one person can make an impact.”

Referencing King’s ability to bridge racial, religious, and other societal divides, Henderson asked Jackson how she saw his legacy being carried out in the future, especially for young people who are wondering how to mobilize for justice.

“In this decade in particular, I think citizens are becoming smarter and they’re asking more questions,” Jackson said. “And I’m happy to see that. We owe it to ourselves in this era to be informed first and foremost.” She emphasized the importance of seeking out information and consulting subject matter experts on issues before reacting to them. “Beyond that, though, I think this is where you see people shine. I think we’re in a time and an era that is calling for people to be leaders.”

At the conclusion of the conversation, Henderson asked Jackson a more personal question: What would she tell her 20-year-old self about the journey ahead?

Jackson hesitated to express any regrets or a desire to change the past. “I think in a journey, there is supposed to be joy and pain,” Jackson said. “The pain helps you to remember you’re human. The pain is often what propels us to take the next step or to become curious or to want to do something different or to shift your position—so you need that.” As for the advice she would give her younger self? “Just keep pressing forward, just keep going, don’t have any regrets, don’t sweat the small stuff.”

Henderson in turn reflected on the same question. “If I were to talk to my 20-year-old self, I would want to tell myself I am enough. And if I knew that, then I would stay with the gifts that I’m given and continue to utilize those on moving forward to contribute to humankind.”

Presentation of the 2020 awards followed the fireside chat, along with a performance by the singing group D’Vine.

In her closing remarks, Goizueta Dean Erika James congratulated the award recipients and thanked Jackson and Henderson for their moving conversation. “Thank you for the work you’ve done with Project Pinnacle and the difference that you’re making in the lives of so many young people in Atlanta,” she said, addressing Jackson. “And Dr. Henderson, you concluded by making the remark, ‘I am enough.’ Thank you for helping us remind ourselves that we’re always good enough, no matter where we are in life.”

Why Learning is a Cornerstone of Innovative Leadership