Below is an excerpt from 11Alive Reporter, Jon Shirek, taken from his coverage of proposed new legislation to ban the sale of cyberstalking apps.

“Legislation has always had a tough time catching to may of these technological changes,” said an Emory University professor in Atlanta Thursday night.

Ramnath Chellappa, Ph.D., professor of Information Systems and Operations Management at Emory’s Goizueta Business School, said it’s not clear how the legislation could be enforced, given the difficulty that average people would have of even knowing that someone had installed the spyware on their smartphones.

“These are the unimagined, unanticipated consequences of technology,” he said. “A person should know what is being collected about them. So whether it is a spouse or whether it is somebody else, if they’re collecting information about someone else without their knowledge, I think that would violate, perhaps, many existing laws, right now.

11Alive’s Jon Shirek asked, “How does somebody detect whether that software is on their phone, or can they?”

“If you’re not a technically savvy person, perhaps it would be very difficult to detect,” Dr. Chellappa said. “The combination of the mobile technology and the GPS technology simply takes this to a whole other, new place…. Literally, every single moment (is tracked) where you could be” without knowledge or consent or subpeona. “Things we have seen in spy movies have all come to reality.”

People often do give their consent to companies that request to track their locations in order to receive coupons from the businesses on their phones, for example, when they are near the businesses. The difference, Dr. Chellappa said, is that the phone customer has given consent, compared with victims of smartphone cyberstalking who have not. 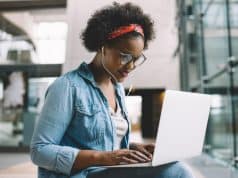