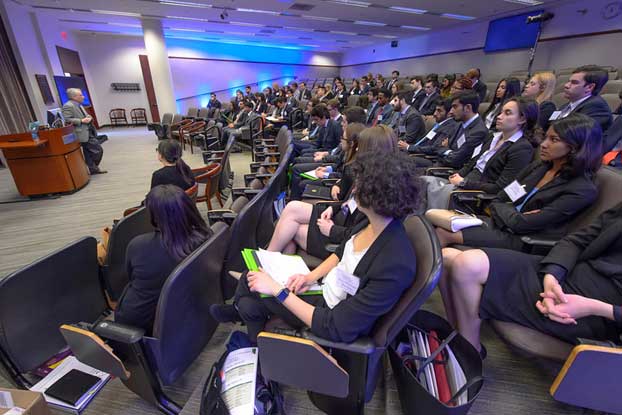 When a company faces crisis, the ability to navigate through the incident, stabilize and thrive on the other side frequently comes down to one thing: leadership.

Attendees at Goizueta’s 17th Undergraduate Business School Leadership Conference, held Feb. 18-20, got an in-depth look into what it means to rise to the call of leading through crisis. The event is hosted annually by the Goizueta BBA Council and this year drew student leaders from 23 top-tier business schools from points across the United States and as far as Spain, Mexico, Germany and the United Arab Emirates.

What is a real crisis?

James, whose research examines crisis and organizational and leadership response, explained that crisis is tied to context. Events like a CFO leaving unexpectedly or a company not being able to make its payroll don’t always equal crises.

“A real leader would have thought through these scenarios and have contingency plans in place to deal with them,” she said.

But if the CFO left with the announcement that he or she was no longer willing to cook the books for the company or the organization announced that it wouldn’t be making payroll because it lost its biggest client, the same scenarios would become crises that leaders must manage head on.

“A true crisis is something that impacts a company’s financial well-being or business opportunities,” she said.

According to James, crises are often ambiguous situations with low probability that take organizations by surprise and leave executives with little time to respond. Crises evoke initial psychological impacts such as disorientation, fear and despair, as well as behavioral reactions including paralysis, denial and defensiveness. After leaders have time to process the event, psychological responses transform into anger, guilt and anxiety, and the resulting behaviors transform into responses such as damage control or finding ways to manage through impressions left by the situation.

“These mindsets diminish your ability to be a leader,” James said. “Long-term, strategic planning goes out the window when dealing with stress. If we’re not in a good emotional space around this, we’re not going to be making good decisions.”

Furthermore, as one student pointed out, leaders set the tone for organizational response. If they are showing anger and engaging in negative aftermath behaviors, so will the rest of the company.

The impact of true leadership

[pullquote]“These mindsets diminish your ability to be a leader. Long-term, strategic planning goes out the window when dealing with stress. If we’re not in a good emotional space around this, we’re not going to be making good decisions.” – Dean Erika James[/pullquote] Keen, popularly recognized for his deft leadership of the U.S. military-based response in the wake of the 2010 earthquake in Haiti, provided insight into effective crisis response. He happened to be in Haiti at the time to speak with the country’s U.S. ambassador about the impending hurricane season.

Instead, he found himself leading in the wake of one of the largest crises the country ever faced.

“We were at the ambassador’s house and watched it shake like a palm tree in a storm,” he said. Then they heard what sounded like explosions — it was multistory apartments and hotels crashing to the ground.

“We instantly knew it was one of the worst disasters in the country’s history,” he said. “We just didn’t realize how significant it was.”

In all his years of service, Keen said, he’d never seen death and disaster to that degree.

His response was to step into the role of a leader before anyone needed to ask. Immediately, Keen along with the Embassy leadership set about the task of accounting for Americans working at the Embassy and in Haiti, find a phone and get a line into the U.S. and government leaders.

Keen, like many well-regarded leaders, is quick to recognize that he was not alone in successfully navigating the quake and its aftermath.

“This story isn’t about the U.S. response,” he said. “It’s about international cooperation and collaboration.”

He described three lasting lessons of leadership that effective leaders employ in the face of crisis.

Second, leaders must be adaptable and be able to adjust organizational culture when necessary. The military’s typical command-and-control (C2) style of leadership, for instance, wouldn’t yield the most effective results while working with the United Nations and non-government organizations to help an impoverished country rebalance in the wake of a disaster. It was more about collaboration, coordination, cooperation and communication (C4) among all those organizations responding to the disaster.

Third, leaders must be resilient and empathetic, and prepared for the psychological and behavioral outcomes all people experience in the wake of a crisis.

Keen’s mantra at the time was, “Today is better than yesterday, and tomorrow will be better than today.”

It offered hope to the people affected while making it clear that responders needed to prioritize what’s important today without losing track of the future. James noted this was an excellent example of a critical component of crisis leadership.

“Leaders need to have a clear mission and idea of what success looks like,” she said.

Inspiring a new generation of leaders

The day started with a talk by Rick Gilkey, a professor in the practice of organization and management at Goizueta and a professor of psychiatry and behavioral sciences at Emory’s School of Medicine, where he is an associate professor of psychiatry. His research focuses on understanding how the brain operates in high-level cognitive tasks of an executive population and how to facilitate these types of learning and thinking.

Regina Espinoza Athie, an accounting student at ITAM university in Mexico City, found inspiration from Gilkey’s insights into the minds of great leaders.

“I took three incredible things away from his talk,” she said. “The first was: ‘When we dream alone, it is only a dream, but when we dream together, it is no longer a dream, it is the beginning of a new reality.’”

Leaders should inspire others and get more people involved with missions and goals. The second is that people are very complex.

“This got my mind clear,” Espinoza said. “He explained that we all have so many emotions and everyone thinks very differently. When you are part of a team, you are responsible for working with every single person.”

Idiosyncrasies make it challenging, but in the end creating order in the chaos is how things get done.

Finally, Gilkey explained that leaders must understand their own thinking and behaviors when solving problems.

Espinoza’s lasting takeaway is that “to be a great leader, you have to understand yourself very well.”

James: Business can go beyond the status quo