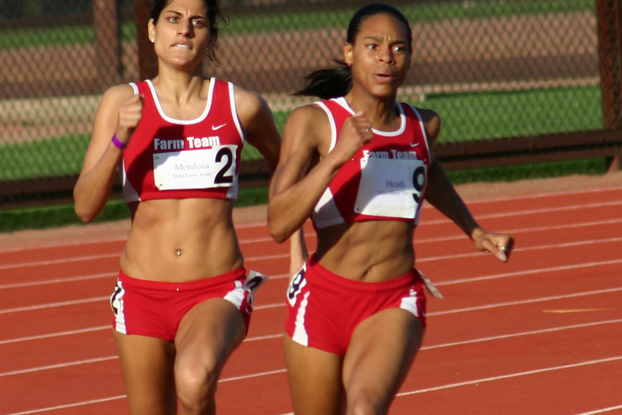 If internal drive is any indicator, then Ty Heath 12MBA is a woman on the move. Although track and field absorbed her early years, now she sprints between her role as the agency and partner program development global lead at LinkedIn Marketing Solutions to the company she founded: Spectacled Marketer. Heath recently spoke with EmoryBusiness about family roots, drive, and going for gold in life.

EB: When did your love of track and field begin?

I love pushing myself to my physical limit and I love winning! I started racing other kids on the street from lamppost to lamppost in elementary school. My parents are from Jamaica, where track and field is the national sport, and both ran track─my dad was a sprinter and my mother was a hurdler. You could say that it is in my blood. My parents nurtured my love of track and field by taking me to the track during summer vacation and after school.

EB: Did you always want to participate in the Olympics?

While I never made the Olympic team, my track and field journey has been a major contributing factor to my success. I competed through grade school and went to Georgetown University on a track scholarship. In 2002, I ran one of the fastest times in the nation at the NCAA championship, becoming a top-ranked 800-meter runner at Georgetown. That’s when the Olympic possibility became real. I decided to join the Nike Farm Team based at Stanford University, with the goal of trying out for the Olympics. Although I didn’t make the United States team in 2004, I’ve never lost the desire to compete. After moving to New York in 2006, I joined the Central Park track club to continue training and competed in the Jamaican Olympic Trials in 2008.

EB: Would you explain the qualifying process?

Simply put, each Olympic Trials competitor must meet the qualifying standard (within a specified time period) for his/her event. This year, nearly 40 women in the U.S. hit the qualifying time for the 800 meters, 2 minutes, 3 seconds. At the trials, there were three rounds of competition over several days. In the finals, the top three athletes win a spot on the Olympic team. It is surreal to train for months and have the deciding factor come down to a two-minute race!

Be present in the moment. Be fearless and go after everything you want.

EB: Who is your favorite Olympian—past or present? Why?

Do I have to choose just one?! I’m a big fan of the electrifying Usain Bolt. Besides him, Cathy Freeman has always inspired me. Freeman is a powerful 400-meter runner and in 1990, at age 16, she became the first Australian indigenous person to win a gold medal at the Commonwealth Games. As an Aborigine, Cathy is a role model and a symbol of national reconciliation between indigenous and non-indigenous Australians. In the 2000 Sydney Games, she won the 400-meter final, bringing home a gold for Australia.

EB: Do you remain active in your sport?

Yes! In spring 2016, I reunited with my Georgetown teammates to compete and raise money to fight Huntington’s disease. We competed in the 4×400 meters in the USA Track and Field Masters Indoor Championships in Albuquerque, N.M. We ended up crushing our fundraising goal! The icing on the cake was setting a world record for our age group. It was a blast! We will be reuniting to do it again next year.

Track is fun but like any sport, to get to the highest levels of competition, you have to be able to deal with pressure. In 2001, at Penn Relays, the biggest and I would argue best track meet in the world, with nearly 50,000 people watching, I took the relay baton from my teammate as the anchor for Georgetown in the Championship of America 4×800 meter race. What was at stake? Bragging rights for the next year and defending Georgetown’s title.

Unfortunately, it wasn’t my day. I was out-leaned at the finish line by a competitor from Florida. It was an exciting race but they replayed that clip on ESPN over and over that evening. I was so devastated. Yet, I could not afford to stay down long. The next day I helped my team clinch victory in the distance medley relay. Track taught me resilience.

Through competition, I’ve learned to look at the bigger picture. Doing something and getting it wrong is at least 10 times more productive than doing nothing. Growth is a process of trial, error and experimentation. The “failed” experiments, the lost races, are as much a part of the process as the experiments that ultimately “work.”