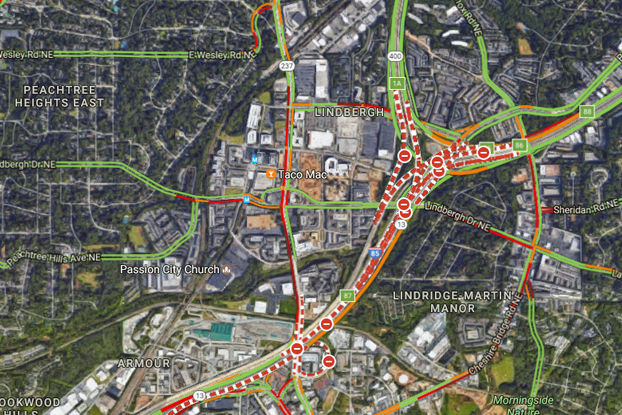 The fire that burned under a bridge on I-85 North Thursday evening did more than cause a collapse of the roadway and potentially months of traffic woes. It added a cloud of smoke that blurs the future for countless businesses in the area.

“You’ve got lots of little restaurants and shops… lots of people who have establishments a couple 100 yards to a couple miles from where the actual bridge collapse was,” Smith told the hosts of WABE’s “A Closer Look” Friday morning.” All of those businesses are really going to have a headache. If you’re hoping people are going to be driving by and police are [rerouting] traffic, that’s not going to help you at all.”

In an interview with the Atlanta Journal Constitution, Smith explained how the road collapse and traffic diversions may affect deliveries and the movement of other essential items.

“This will eventually sort itself out, but it won’t look pretty getting there,” he said.

As far as long-term impact on the economy, Smith anticipates some small changes — perhaps a slight increase in unemployment or dip in gross domestic product. However, the real burden may come from projects that won’t get done.

Repairs will cost millions and last for months.

“… That’s money that could be used in any number of other construction projects in need or any number of resources that need money,” Smith said. “But now we’re not going to do that because we’re going to take care of something that’s broken.”