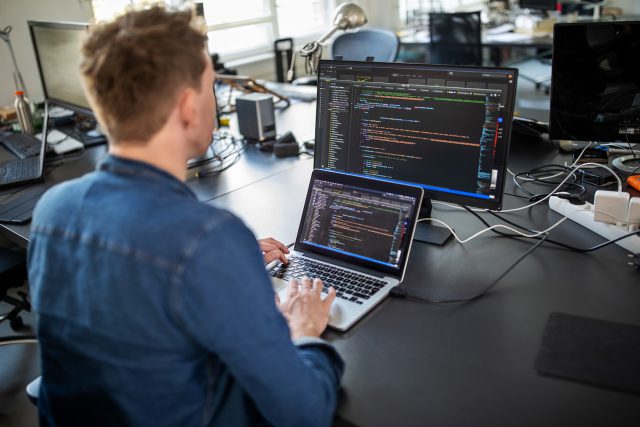 Apple founder Steve Jobs once said, “Everybody in this country should learn a computer language because it teaches you how to think.” That’s the intent behind Think.Code.Make, a popular undergraduate course that uses coding as the foundation for creativity.

“The overarching principle of the course is that it’s not just about coding. It’s about the nexus of technology, imagination and creativity,” says Benn Konsynski, George S. Craft professor of Information Systems & Operations Management, who created the course six years ago with Adjunct Professor Scott Blanck 12MBA. “The Think part is the main principle. You learn to code to learn to think in the 21st century.”

Students take the class with an eye toward broader thinking that future careers will demand.

“We state at the beginning of the course that they’re not going to go out and become developers. They’re not going on to become computer science grad students,” says Blanck, who teaches the class. Instead, they’ll gain an aptitude for the language of coding and systems thinking, giving them another way of communicating with developers, project managers, and marketing strategists down the road.

“In today’s digital world, decisions are increasingly made by systems,” Blanck says. “Workers need to understand how such decision systems operate and are built.”

Open to juniors and seniors, as well as graduate students, Think.Code.Make is an elective in Goizueta’s STEM portfolio. Students in computer science, public health and other areas take it as well. The course has expanded to meet demand and is now offered twice in the spring and once in the summer. A growing number of juniors take the class to create projects that will help them land summer internships.

“They very much like to have built apps, to have done coding, and used APIs. Those are nice things to place on your resume for internships,” Konsynski says.

API, or application program interface, is a software go-between that allows two or more apps to talk to one another. Students use APIs to tap online data, and they develop basic skills in Python, a flexible, beginner-friendly programming language, to massage that data. Some also learn web design and JavaScript. They build projects based on their interests, using computer languages and apps best suited for the job.

Class activities mirror maker practices popular with hobbyists. One student made a device that captured flight data over radio waves to track flight patterns over Atlanta. Other projects determined where political donations were coming from, created a budgeting tool for use by financial analysts, and measured the success of momentum investing.

“From a business and analytics standpoint, their programming skills are needed for data preparation and organization, and Python is particularly useful there,” Konsynski says. “JavaScript is used for pulling information off the internet and for visual displays they might want to create.”

The class is part of a growing portfolio of computer courses at Goizueta; a new course focusing on Python for business started last year. Goizueta’s STEM degree, a Master of Science degree in business analytics, also centers on Python.

“Python has been used in data analytics courses for some time, and we expect as we develop more and more STEM requirements that programming will be a key part of that,” Konsynski says.

Think.Code.Make gives students the chance to play and create in a whole new language. For most, it is a first step into a new way of thinking they will build on for the rest of their lives.

“It’s about how you approach problems and how you think,” he says. “It’s important to look at the programming per se as a process of taking the discipline of the language and using the language itself as a means of influencing how you think and express.”