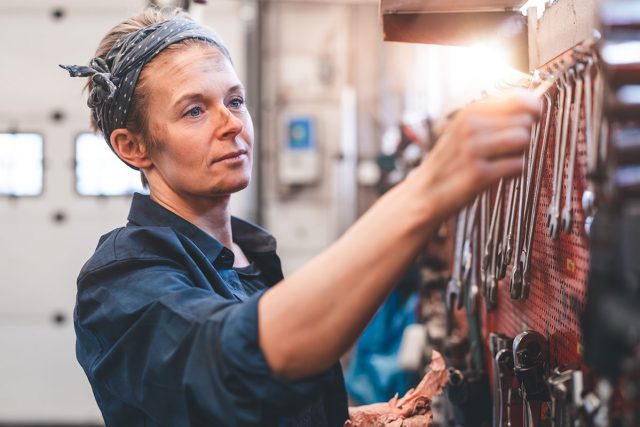 Social class has a significant role to play in career success in the United States. A growing body of research is shedding disquieting light on the extent to which working class Americans face discrimination in recruitment, pay and promotion – despite having a college degree. This demographic is up to four times less likely to get hired, 34% less likely to accede to leadership roles, and earns around 17% less on average than counterparts from middle or upper-class backgrounds.

But while research is starting to document how class can impede or accelerate professional success, it remains unclear why these discrepancies exist. What are the mechanisms or dynamics at play that make it so much tougher for working class people to succeed than others?

Goizueta Business School Assistant Professor of Organization & Management Andrea Dittmann has an interesting hypothesis. She believes that employees from different backgrounds can bring inherently different strengths and weaknesses to the workplace; advantages and disadvantages that speak to certain norms governing how we think about work and leadership. And it boils down, she says, to the way we work with others.

“People from working-class backgrounds—those with blue-collar parents, who might be the first in their family to get a college degree—typically relate a certain way to other people. They are better connected to others, more team-like in their approach, than their middle-class counterparts who see themselves as more independent or unique,” says Dittmann.

This team spirit could be working against lower-class employees, she says, in the sense that they see themselves or are perceived by bosses as being less adept at working autonomously or as individuals within organizations; and are therefore viewed by others as less poised to advance into roles of greater responsibility.

Across the board, working class participants did not perform as well as middle-class in tasks that involved working alone. However, when working together in group-based activities, they outperformed their middle-class counterparts—significantly so.

On the flip side, this very capacity to work well with other people could actually give working class employees an advantage in team-based activities or cultures; an advantage that might translate into concrete benefits for organizations.

To put this to the test, Dittmann conducted a series of studies aimed at unpacking how individuals perceive themselves within the context of work, and at the interactions that occur between employees and the workplace. Among these studies were qualitative interviews with MBA students from different social class backgrounds about their experiences navigating white-collar workplaces after graduating from college. She also ran a number of experiments to assess how well working class people performed in teams and individually, and how environments that prioritize collaborative dynamics or interdependence might produce better experiences and outcomes for employees than environments geared to working individually or independently.

“The studies included things like randomly assigning participants from working class backgrounds to tasks that involved working alone or in teams. Among these tasks were things like giving people a survival scenario—a hypothetical situation in which they have to organize a range of resources or items in order to survive. I wanted to be able to rank participants’ success from optimal to suboptimal and see how that varied according to the setting: whether they worked independently or interdependently,” she explains “The studies also captured feedback in terms of how they perceived their own performance and skills. What I found matched the hypothesis.”

Across the board, working class participants did not perform as well as middle-class in tasks that involved working alone. However, when working together in group-based activities, they outperformed their middle-class counterparts—significantly so.

Dittmann puts this down to “working class contexts” in the United States that inherently afford an “interdependent model of self.” These socio-economic contexts historically provide fewer financial resources, lower power and status, and limited opportunities for choice, influence or control, she says. As a consequence, people from these backgrounds tend more to be part of a group, and to rely on and work with others in order to secure more material assistance and support. Conversely, the middle or upper-class context within U.S. society, with greater economic resources and fewer environmental constraints fosters behaviors that are more independent—individuals are expected to take charge, exert influence, and stand out from others. And they are more likely to bring these “independent models of self” with them into what Dittmann calls “gateways institutions” such as colleges and business schools—and inevitably, into the world of work.

The Catch-22 of Working Well with Others

“It’s a kind of catch-22. Working class kids don’t make it into the gateway settings of school or college as much as middle-class kids in the U.S. They are significantly underrepresented in leading business schools like Goizueta, at roughly 15% of the student population,” she notes. “So, the higher-educational context—the talent pool for corporate America—is very much geared to a different social demographic and dynamic; one that inherently favors independent work ethics and approaches and sees them as the norm. Other ways of working, collaborating, and contributing risk are being undervalued as much as they are underrepresented.”

This is serious concern from both a societal and a business perspective, says Dittmann.

It challenges social equity, social mobility, and fair exposure to opportunity; and it undermines the principles of meritocracy around which American society is ideally meant to be shaped. Simply put, says Dittmann, people are not getting selected for jobs that should be. And hiring these individuals should be on the radar of organizations around the country.

“We know that companies that are more diverse perform better than others, and diversity needs to extend to social class. What my research and others are showing is that people from a working-class background tend towards behaviors that are more relational, that they are better at working together. If they fail to make it into the workforce in a more representative fashion, companies are basically missing out on opportunities to form better teams.”

If you want good team performers in your firm, you need to think about hiring people in more inclusive ways and that means thinking about hiring the first-generation college grads as well as the middle or upper-class candidates.

Better teams make for better processes, says Dittmann. Groups of engaged and effective team players tap into diverse perspectives and fields of expertise. They are also better at taking turns to contribute, to be the protagonist, and to lead, and that means that they are better poised to surface important information, she adds.

Organizations would do well to be more cognizant of these benefits, and think about integrating social class parameters into their inclusive recruiting processes.

“If you want good team performers in your firm, you need to think about hiring people in more inclusive ways and that means thinking about hiring the first-generation college grads as well as the middle or upper-class candidates,” says Dittmann. “You also need to think about the way that you assess staff—whether you favor individual performance over teamwork—and how you are managing the career progression of your talent. And it’s worth remembering that collaborating with others is a core leadership skill. Leadership is a team sport too.”

Faculty research like Dittmann’s is a critical element in Goizueta Business School’s drive to develop principled leaders who are better prepared to engage in the business of tomorrow. Learn more about how our faculty members push boundaries by investigating vital business issues that impact our global economy.

We Asked, and Goizueta Community Members Answered: What Are You Thankful...