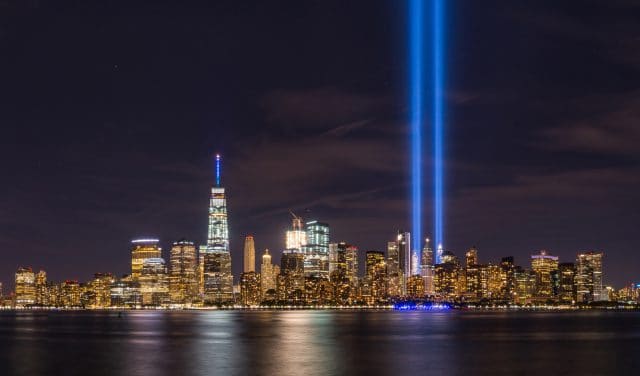 As we commemorate the 20th anniversary of 9/11, I wanted to take a moment to reach out to share a moment of reflection with you.

I would also like to honor the Goizueta alumni we lost in the attacks — Ehtesham Raja 98MBA (World Trade Center, North Tower) and Todd Reuben 83BBA (American Airlines Flight 77). They will forever be missed by our community.

This event served as a pivotal moment for our nation and on a very personal level for so many of us, myself included.

For me, remembering back to this day still makes me shudder. It put many things in life into perspective…how a beautiful day in September can become a defining moment of devastation for the nation. One of the bright lights I felt was the outpouring of support and love that came to us from around the world.

I’ve included a few of my reflections below, along with the unique perspectives of other Goizueta faculty and leaders regarding how 9/11 changed them personally, the impact on our society as a whole, and lessons for future generations.

I understand that we are all on our own unique journeys in the context of these events. We hope you take time to remember and reflect in the way that best serves you.

What is your most vivid memory of that day?

“I remember that it was a gorgeous day in Atlanta and that it felt surreal to note how everything looked so peaceful in sharp contrast to what was unfolding. I watched the tower collapse again and again on the large television in the Commons with a group of students who had just completed internships in those offices. I shared the angst of waiting with our many New Yorkers who could not get through to their families. I felt deep sorrow for my city. I grew up in New York and celebrated birthdays in Windows on the World when it was new. I felt a very personal loss.”

“My most vivid memory was thinking about the Rangers I had just left in late July, as I had just turned over Command of the 75thth Ranger Regiment in late July, after 2 years as serving as the Commander. I knew at that moment they would be immediately put on a posture to deploy, as they were part of our Nation’s immediate ready force to deploy anywhere in the world on a moment’s notice to protect America.”

“I remember when classes restarted how difficult it was to teach at first, it seemed so small after such a world-altering and devastating event. I remember talking with Michael Sacks about how odd and hard it was to return to teaching and how it choked me up to face my students. Finally, I remember that afternoon, my son Hayes 17BBA and his best friend finding American flags and running up and down the street holding them high. There was such a sense of cohesion and patriotism.”

Allison Burdette, Professor in the Practice of Business Law

“The events on 9/11 revealed the fragility of our shared global humanity as well as the most sinister side of globalization itself. It shifted my worldview significantly and is a big reason why, as a sociologist, I chose to study the types of things that connect us to one another despite vast geographic, economic, and cultural differences.”

“It was one amongst a few things that remind me that life is precious – and can be precarious. Each day counts and ensure you let the people around you know that you value them.”

“September 11, 2001 was one of the saddest days of my life, made more impactful by the fact it was a moment of heartbreak shared with millions of others. In fact, I still have the picture I took many years before from the top of the World Trade Center when I visited with a friend as a tourist. I display that picture in front of my desk as a reminder of that day.”

“It has made me appreciate even more that freedom is not free. We lost approximately 2,500 service men and women over the last 20 years in Afghanistan. My son deployed twice as a member of the 173rd Airborne Brigade to Afghanistan and my hope is that his son does not have to return there. I think of all the Gold Star families who will not have their loved one with them this 9/11 as we enjoy our freedoms due to their sacrifices.”

What cultural changes did you see immediately / over the years after the attacks?

“The event was a grim reminder that what connects us globally can also divide us and tear us apart. It is also hard not to mention the two long wars or the broad distrust and suspicion that was sowed in the immediate aftermath of the attacks. However, it also revealed the resiliency and resolve of those who, through all of the violence and tragedy, still found ways to love and respect one another despite vast differences.”

“The event was a blow to our national psyche and permanently increased our sense of vulnerability. Having grown up in a country that at the time proudly describes itself as a ‘melting pot’ of diverse cultures, to me that felt like the first wave of public and semi-sanctioned xenophobia in my lifetime. In those ways, the attacks succeeded in impacting day to day life and perspectives for many Americans. Positive reactions included greatly enhanced recognition of first responders, especially firefighters, as the heroes that they are. There was a brief but profound feeling of national unity along with the comforting strong support we received from our allies around the world.”

What lessons do you feel future generations should take away from the events of 9/11?

“9/11 like any personal, national, or global tragedy, has the potential to help us recognize our interdependence and refocus our individual and collective priorities around what is significant and meaningful. Nevertheless, for most of us that realization, while profound, is also ephemeral.  We seem wired to want to return to however we define normal living as quickly as possible. I suppose that across generations, the best we can hope for is that each tragedy brings us a little closer to avoiding the next one.”

“I hope one lesson is that being a closed society and disengaged is not in the interests of our National Security. Our collective security can only be achieved by partnering with other nations around the world. Also, I hope we will learn from the last 20 years, that it takes a commitment from the American people to go to war and we should be very clear on what our goals and objectives are before we commit our troops into combat. It is now time to look to the future and come together to work with Nations around the world to not only provide collective security, but provide stability that can create equality and economic prosperity for all our countries.”

“Never give up striving for a more peaceful world. The alternative is too grim. It won’t be easy, but as someone who has taught baby boomers onwards, I see in Millennials and Generation Z future leaders with idealism, talent, and an embrace of diverse cultures and people.”

Homecoming 2022 Reunited Classmates and Friends Through KEGS and a Family...