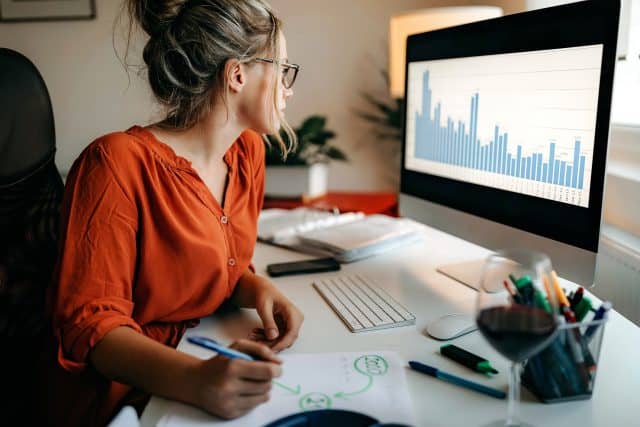 In 1999, Busse and his coauthors explain, the net assets of passive funds were “less than an eighth the assets of active funds.” But by the end of 2019, “the market share of passive equity funds increased to more than 50 percent,” Busse, Chung, and Kottimukkalur note. Passive funds track indices such as the S&P 500, Dow Jones Industrial Average, NASDAQ Composite, and Wilshire 5000—all indices that have been difficult to beat over the last decade. According to the Wall Street Journal, from 2008 to 2018, more than 80 percent of actively managed funds in the U.S. underperformed the S&P Composite 1500.

This is in large part, the trio notes in their paper, because the so-called “FAANG” stocks—Facebook, Apple, Amazon, Netflix, and Google—comprise such a large part of these indices. In fact, the top 10 stocks in the S&P 500 currently make up around 30 percent of its market cap.

“The market caps of these companies are huge, and they’ve done exceptionally well since the financial crisis,” Busse explains. Hence, active fund managers and their teams of analysts have found it much more challenging to discover undervalued and overlooked stocks with positive alphas ─ the stocks that outperform an index. “As such, a general move toward passively managed funds is not so surprising,” the paper reveals.

Making it even more difficult to find diamonds in the rough is a lack of volatility in the stock market. Except for some isolated periods, including the month or so around the start of the pandemic in March 2020, the market hasn’t experienced much volatility since 2008. Without wide swings in prices, fund managers have less opportunity to buy low and sell high. Over the same time period, aggregate stock liquidity has also been high, which means less chance for fund managers to pick up winners at bargain prices. “When there’s money in the market—when there’s liquidity—it means there aren’t a lot of disagreements on prices,” explains Busse. “Liquidity is inversely related to mispricing,” the researchers explain in their paper.

This combination of circumstances—the rise of the FAANG stocks, the lack of market volatility, and higher liquidity—is making it much more difficult for actively managed funds to find stocks that will help their funds beat the indices, and therefore, outperform the passive funds. As a result, justifying their management fees gets more complicated. According to Thomson Reuters Lipper, the average expense ratio (management fees divided by total investment in a fund) for actively managed funds is 1.4 percent compared to 0.6 percent for the average passive fund—nearly three times as much. While active fund managers have realized that these higher costs are no longer paying off and have moved to reduce them, actively managed funds continue to lose market share.

“There haven’t been any papers that try to explain why passive funds have gained so much market share,” says Busse. He and his coauthors believe their research illustrates that it’s in large part because the market, post-financial crisis, is challenging for stock pickers. “As such, it has been difficult for actively-managed funds to recoup the costs associated with active management, and compared to earlier periods, passively managed funds are better positioned to gain market share,” they explain. “As the payoffs to active management decrease, it becomes more difficult to justify the costs of active management, and, thus, we expect funds to decrease these costs given their negative performance implications.”

Busse doesn’t believe the current fund management environment will continue indefinitely. When the pandemic knocked the S&P 500 down 30 percent in March 2020, managers did gain opportunities to find positive alpha stocks—which they bought. “It’s just, on average, over the last 10 years, there haven’t been enough of those opportunities,” explains Busse. “It’s a matter of hanging in there and, in some sense, keeping your investors from fleeing to passive funds until the environment is a little bit better.”

Goizueta faculty like Busse continually examine the way business operates today and identify the challenges ahead. Through multi-year research studies, findings shape the way we strategize for the opportunities of tomorrow. Learn more about Goizueta faculty research today.