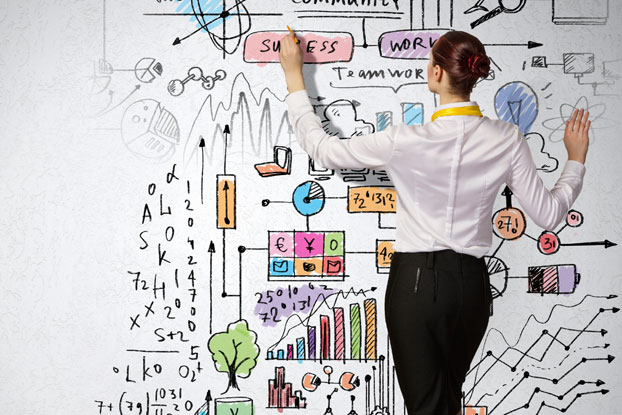 [pullquote]Representation lags, but the field might have reached the tipping point for change.[/pullquote]

For decades people wondered when women would take the technology industry by storm.

It’s certainly a lucrative career route. The sector is one of the few bright spots for long-term job growth. Plus, women in tech earn, on average, 33 percent more than those in other fields.

But after an early boom, the number of women entering technology has flat lined.

Women make up around 25 percent of the workforce in STEM fields (Science, Technology, Engineering and Math), a rate that has persisted for the past decade. The ratio is heavily influenced by a lack of representation in engineering and computer science occupations.

It’s all very sobering, but it doesn’t have to be discouraging.

Goizueta professors and alumni have their own take on what may be perpetuating the problem. They also have thoughts on how women developing their careers can face the issues head on.

While gender parity is widely discussed across industries, Anandhi Bharadwaj, a professor of information systems and operations management at Goizueta, believes one variable makes it a particularly complex issue in the tech sector: speed.

“For those of us who are in a high-profile or fast-track career, the fear of falling behind is always there,” Bharadwaj said. “Because things move so fast in technology, it can feel like if you take your foot off the gas, you’re going to fall behind.

“I think a lot of women wonder whether they will be able to retool their skills and return to their career if they take a year or two off [to focus on family]. That’s a very valid concern. A year or two is a very long time in technology.”

Some data at least inferentially indicates family and work-life balance could be at play. The U.S. census found that nearly 20 percent of female science and engineering graduates are out of the workforce, compared to less than 10 percent of male graduates.

Patricia Arundel 11MBA has held positions at such lauded companies as Sun Microsystems, Microsoft and Google.

While Arundel did not take time off to raise her son and doesn’t necessarily advocate for women to leave the workforce, she supports the choice each woman makes and she has had colleagues point out something very important: No matter how many years you’re out of the technology workforce, it’s not necessary to know every single thing that happened.

“I think it’s a lot less intimidating to think about it like that,” she says. “Did you miss some stuff? Of course. But if you jump in the stream where you are, the water flows around you and you start moving on with it.”

STEM degrees are just one way to get into the field

Arundel’s journey in the tech sector illustrates an easily overlooked point — there’s more to tech than coding. She was an English major in college, with only vague ideas of what she wanted to do upon graduating. After spending five years in advertising and marketing, she happened to find a role in sales at Sun Microsystems.

“It felt like I’d found my home in technology,” she said. “What I absolutely love about it is that it’s so dynamic. Things are constantly changing, so I never get bored.”

Arundel returned for an MBA at Goizueta, graduating in 2011.

Even within the scientific side of these companies, it’s not always necessary to have a degree in technology or engineering.

“The hiring practices of these companies have changed,” Bharadwaj said. Good analytical skills trump STEM degrees at many organizations.

“Part of the irony is that many of the core skills for technology are not derived from the sciences specifically,” said Benn Konsynski, the George S. Craft Distinguished University Professor of Information Systems and Operations Management at Goizueta. “For programmers, for example, I’d look to a music background. I find that some of the best programmers are those who have a musical temperament, who have a sense of harmony and appreciate complexity. Those things are more relevant than a strict, rigid engineering background.”

While the data surrounding women in STEM can feel discouraging, Konsynski cautions older generations to avoid imposing the past on the future. In his work at Emory, he notices increasing numbers of college-age women participating in high-profile tech competitions, including an on-campus hackathon last year.

“Percentage-wise there were more women than I’d ever before seen at a hackathon — I’d say it was probably 40 percent — and it was exciting to me that the winning team was all women,” he said.

Many might see this as a new way of looking at things, but for many women who have been blazing trails in tech, their gender has always been a non-issue. Kanchana Raman 12MBA wasn’t long out of college (not to mention three months pregnant) when she founded telecommunications company Avion Systems in 1996. Today, the Atlanta-based global technology firm employs more than 600 people and works with Fortune 50 clients in the telecom and information technology sectors.

It’s a long list of accomplishments for anyone in the tech sector.

And that’s the point.

Raman has never seen her achievements through the lens of a woman working in a man’s world.

“I didn’t think about it then, and I still don’t,” she said. “In my life, it’s all about technology, deliverables, what your customer wants, cost and quality — I’m thinking about those things, not who I am. When you’re making a presentation, you’re really not thinking about your gender at that point, but more about what it is that you can bring to the table.”

That experience coupled with Konsynski’s observations at the hackathon lead both to wonder if the gender gap won’t subside naturally as new generations enter the field and the Boomer generation — who Konsynski posits may still unconsciously hold on to some old-fashioned biases — heads into retirement.

As heartening as these examples are, multiple sources recommend remembering that, even though there has been a steady increase of women entering college and the workforce, there has not been a corresponding increase of women in tech. Business, governmental and educational leaders should still find ways to encourage change.

Arundel, Bharadwaj, Konsynski and Raman recommend young women in college keep in mind which fields will yield the highest ROI on their tuition investment. All signs point to the tech sector as the safest long-term bet. For women in the field, Raman and Bharadwaj recommend tapping into networks both inside and outside the office.

When seeking out a mentor, Raman recommends looking beyond gender. “In technology in particular, the role model I would be looking for is somebody who has achieved success rather than looking for a gender role model,” she said.

“It’s never too late to decide to get into a STEM career,” she said. “You can become a programmer at a later time rather than beginning the route into technology in elementary school, middle school, high school or even college.”

As Arundel sees it, the fact “women in technology” is such a hotly debated issue in business and politics means that, no matter how challenging it might seem, the time is right for women to make a move.

EDITOR’S NOTE: Plenty of data went into reporting this story, here are some of the sources used: U.S. Bureau of Labor Statistics: Careers in the growing field of information technology; U.S. Census Bureau and Department of Commerce report: Disparities in STEM Employment by Sex, Race, and Hispanic Origin; U.S. Department of Commerce report: Women in STEM: A Gender Gap to Innovation.