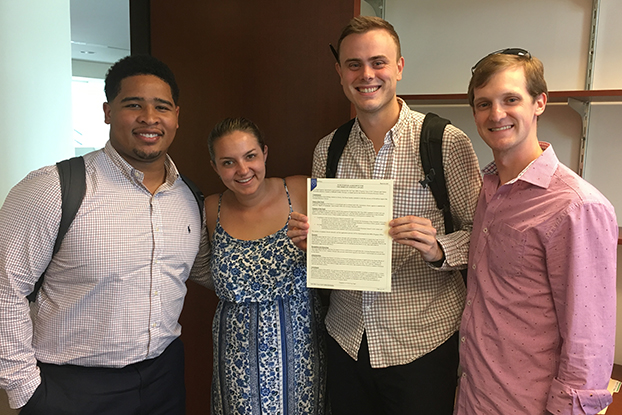 From long nights of studying to leading groups and organizations, there’s no question that students work hard during their time at Goizueta.

That hard work can pay off in a variety of ways, but the latest Full-Time MBA graduating class wanted to take that payoff one step further.

Three Two-Year students and a One-Year student who were part of the student government association at Emory were responsible for this year’s class gift, and they took this task to heart.

After graduating from Wake Forest University and working a fellowship that managed fund raising for the school, Class Chairman Adam Parker knew what it would take to raise money for the class gift at Goizueta.

“I really applied my prior work experience to the proration of my student government role that was creating the class gift,” he said.

With his goals in place, Parker set out and found his committee of students to help him: Donnell McGhee, Jamie Gregor and Ryan Brown.

“As the One-Year class president, part of my responsibility was to ensure that the unique perspectives and opinions of my cohort were incorporated into the longer-term decisions of our MBA program,” Brown said. “When [Parker] came to me and discussed his idea to gather a class gift popular opinion through focus groups, I knew this would be a great opportunity to show the One-Year class that not only does our opinion matter, but it is impactful.”

After a significant amount of brainstorming, focus groups and talking to their fellow classmates, it was clear what the committee needed to do to embody the character the 2017 class.

The Spirit of Goizueta Award was created to recognize and reward students who have contributed to the Goizueta community. Although still in the early stages of becoming a full scholarship, the committee was able to get 90 percent of the class to make a donation and help raise nearly $35,000 toward the class gift. For the scholarship to become fully endowed, a total of $50,000 will need to be raised.

Among others, one fundraiser took center stage and turned out to be a big success for raising money. After recruiting faculty and staff to sit in a dunk tank, students were able to purchase tickets for the opportunity to dunk their favorite faculty and staff members.

“This endowment was started after conducting focus groups and realizing that most of the students we talked to wanted to leave a legacy of community engagement and contributing to a greater good, both of which are vital parts of the Goizueta student experience,” Gregor said. “When this idea was raised, it seemed like the perfect way to recognize students who went above and beyond in contributing to that legacy and celebrate these ideals within the GBS community.”

In addition to giving back to the Goizueta community, students will complete a few basic steps to apply for the scholarship, a process the committee wanted to keep simple.

Students are required to write a 250-word essay with the prompt, “How has Goizueta impacted you and how have you impacted Goizueta?” Additionally, students will need one faculty and one student reference.

“When our class crafted the language of the fund agreement, we emphasized two things: One, contributions to the Goizueta community (such as involvement in clubs, program initiatives, student recruitment, etc.) and two, being respected by Goizueta peers, faculty and staff,” Parker said.

The committee added a provision to the fund agreement that finalists of the award are interviewed by a panel of diverse, young alumni who have graduated from the Full-Time MBA in the previous five years.

“I think I would just want others to really be able to empathize and put themselves in the shoes of a current student who would be applying to the scholarship,” McGhee said. “This isn’t some regular scholarship because it was created by the students based on our experience.”

Although the scholarship will take time to build, Parker said it’s all about helping future students at Goizueta.

“We want to help ease the financial burden of future generations of GBS students,” Parker said. “During the fund’s first few years, the award may only cover books, but as the fund grows it will be able to cover much more, with the ultimate goal of this being a full scholarship. Every little bit helps.”

Other class gifts include:

A Wake-up Call for the Wine and Spirits Industry Demands Creative...

Job Offers Up for Goizueta MBAs