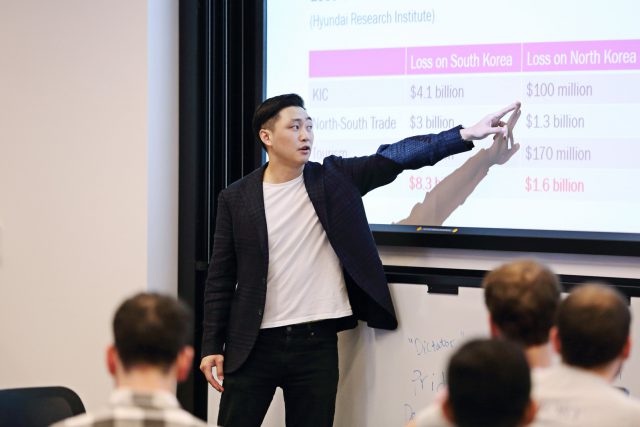 Jongdae “JD” Kim 07Ox 11C 17EvMBA grew up in South Korea and the United States, where he was born. He carries both U.S. and South Korean passports, and served two-years of mandatory military service in South Korea. Growing up, Kim questioned his identity: was he Korean? American? How could he reconcile his dual identities?

“I came to the open-ended conclusion that I’m a global citizen. Ever since, I’ve been on a journey to find ways to contribute to peace with the unique strength I possess from being part of a global diaspora,” said Kim, co-founder and executive director at Re’Generation Movement, an Atlanta-based organization that empowers young diasporas, including refugees and immigrants, to find their identities as peacemaking global citizens and contribute to the creation of a harmonious society. “I can be a bridge maker between cultures.”

As the eldest grandson of former South Korean president, Kim Dae-jung (1998-2003), a pro-democracy politician, Kim is in a unique position to be that bridge maker. Before becoming president, Kim Dae-jung was an opposition leader who fought for democracy. He survived assassination attempts, imprisonment, and a death sentence. Throughout it all, the elder Kim believed a reunified Korea was possible. For his work toward this goal, Kim Dae-jung won the 2000 Nobel Peace Prize. He also passed on this belief to his grandson. Kim recalled a saying his grandfather often told him: “In human hearts there are angels and evils and we have to live accordingly so that the angel wins. The way to do it is to love people. To love your neighbor.”

This past February, Kim spoke at a session organized by YeonSu Jeong 20MBA, that was part of the Goizueta Seminars for Global Citizenship (SGC). Jeong, who is from South Korea, wanted to teach her MBA classmates about business opportunities on the Korean Peninsula. When Jeong approached Megha Madan, associate director, Goizueta Global Strategy and Initiatives (GGSI), and Brian Mitchell, associate dean, full-time MBA programs and Global Strategy and Initiatives, about her idea for the seminar, they were quick to it to the lineup. SGCs take place before students travel as part of a Global Experiential Modules (GEM), and a trip to South Korea was planned for this spring (the trip was later canceled due to the COVID-19 pandemic). Given the topic, Madan, whose department sponsors GEMs, immediately thought of Kim. Jeong had already asked him to participate.

“It is truly part of GGSI’s core to support opportunities such as this one that brings the world to Goizueta by way of our students, faculty and staff,” explained Madan. “I am grateful to work under leadership that is incredibly supportive of the global work that we do.”

“We business students will face many conceptual problems at work and it’s our job to see the potential in these problems and make it a real business,” said Jeong. “I wanted to be able to provide future business people with insights that capture unseen business opportunities from changing global or social circumstances. From that point of view, I’m glad to connect people in business and in the peacemaking movement with the Goizueta program so that we could widen our vision.”

Kim’s presentation focused on the fiscal impact of an economically unified Korean Peninsula—specifically the benefit that would be derived from reopening the Kaesong Industrial Complex, a 1.3 square mile compound located just north of the border between North and South Korea. The Kaesong Industrial Complex was opened in 2004—a result of The Reconciliation and Cooperation Policy Towards the North (better known as the “Sunshine Policy”) enacted by Kim’s grandfather in 1998.

During its existence, South Korean businessmen established and managed the complex’s 100 companies in North Korea, while North Korea provided nearly 55,000 low-cost, well-skilled employees. For every $100 million invested in the complex, noted Kim, roughly $1.5-$3.0 billion worth of value was created. However, in 2008, inter-Korean economic cooperation slowed. According to the Hyundai Research Institute, between 2008 and 2011, South Korea lost an estimated $8.3 billion and North Korea $1.6 billion in revenue. Kim blamed politics for the slowdown, and for the complex’s subsequent closure in 2016, but he remains hopeful. Though the Korean peninsula has been divided for nearly 70 years, prior to the Korean War, the country was unified for 5000 years. If economic investment in industries such as tourism, mining and textiles is made, Kim expects that peace “will almost be a byproduct.”

Kim’s connection with Emory University goes deeper than alumni-hood. That’s due in large part to Kim Dae-jung’s relationship with James T. Laney, Emory University’s president from 1977 to 1993. While in the U.S. Army in the late 1940s, Laney served in Korea. After the Korean War, Laney, a Methodist minister, returned to Seoul to do missionary work—from 1959 to 1964. In 1980, President Jimmy Carter summoned Laney to assess the situation in South Korea when students from a local university were killed after being fired upon and attacked during a pro-democracy protest. The South Korean government blamed Kim Dae-jung for instigating the uprising and for promoting the several days of unrest that followed. Known as the “Gwangju Uprising,” Laney was present in the audience when the South Korean supreme court sentenced Kim Dae-jung to death. After an international outcry, Kim Dae-jung was released and forced into exile. He fled to the United States. In 1983, Kim Dae-jung received an honorary degree from Emory University. Both Kim and his younger brother, Jongmin “Jake” Kim 10Ox 14C, earned multiple degrees from Emory University.

Kim understands that his grandfather’s position afforded him opportunities not all refugees have. As part of a social enterprise class while earning his MBA, Kim volunteered in Atlanta’s Clarkston community, well known for its global diaspora. There, Kim met children who wanted to go to college and “resettle well” in the U.S., but who lack the resources to do so. “I was seeing the need but also seeing the potential in these kids. They were just like me,” said Kim. “I realized my identity as a refugee—my grandfather’s identity as a refugee.”

In 2017, immediately following graduation, Kim founded the Re’Generation Movement. “Our mission is to empower a peacemaking global diaspora—not only globally but also locally,” said Kim. The organization provides educational opportunities, creates space for ideas and conversation, and advocates for peace. There are 25 students from 15 different countries in Re’Generation’s current cohort.

As the organization grows, so do Kim’s ideas about what could come next. Lately, he’s been thinking about starting a Re’Generation school. Asked why, Kim answered: “To be more effective in raising peacemakers.”

Report: Salaries for B-school grads on the rise