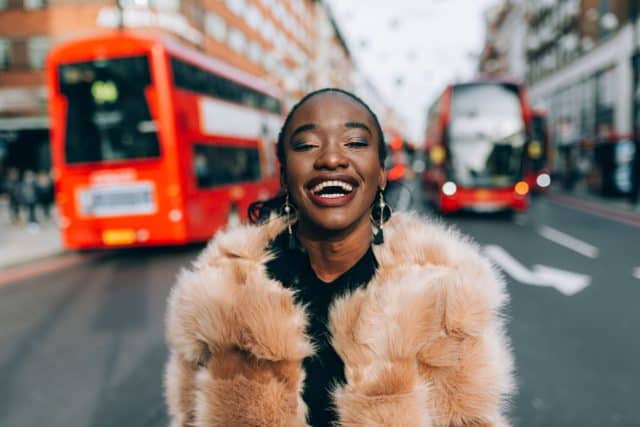 Back in 1994, animal rights organization PETA launched what would become one of the most iconic campaigns of the decade – and beyond. “I’d rather go naked than wear fur,” sparked a slew of headlines internationally and won support from celebrities such as Naomi Campbell, Gillian Anderson, Pamela Anderson, and others; many of whom agreed to pose nude or semi-naked in support of the anti-fur movement. Three decades on, in February 2020, PETA announced it was retiring the campaign, saying it was “no longer necessary” and citing the “demise of the trade.” Evidence suggests they are right.

Since the early noughties, the use of fur among the world’s foremost luxury fashion houses has steadily declined. The production of mink and other pelts–an industry valued at $1.8 billion in the late 80s–has declined in America by around 45 percent in the last 20 years, according to the Department of Agriculture. Meanwhile, high-end fashion brands like Gucci, Vivienne Westwood, and Stella McCartney have pledged to go fur-free, with Fendi, Saint Laurent, and others set to follow suit in 2022.

Fur has never been less fashionable. But can activism alone claim victory in the fight for more ethical fashion practices? Emory’s Giacomo Negro, professor of Organization & Management and professor of sociology (by courtesy), has released new research that suggests another major factor played a key role in the process that led to the abandonment of fur; and it’s none other than perennial style bible, Vogue.

We know that the use of fur has been dropping off steadily on the supply side, on the part of producers and manufacturers themselves, in the last two decades. What we didn’t know was how much of this was down to pressure from PETA and other highly-visible activism. Or whether there might be other forces at play–industry intermediaries that have a gatekeeping function, such as the fashion press, exerting a more subtle but just as powerful influence on the producers of fur.

Hypothesizing this to be the case, Negro teamed up with INSEAD’s Frederic Godart and Greta Hsu of the University of California. First off, they had to determine the most important and global of fashion’s gatekeepers.

“There are other publications, but Vogue is undoubtedly a significant force in fashion. The magazine has long occupied a unique position that is neither an insider nor an outsider in the sense that its editors are intimately connected to the top designers and decision-makers in the industry; simultaneously, it’s an external, independent publication with global reach and singularly powerful influence on fashion’s views and tastes.”

If Vogue were to take a certain view of the use of fur in clothing over time, would fashion houses take note and follow suit, the researchers wondered? To test this, Negro et al put together a largescale dataset integrating data from more than 18 years of Vogue’s runway reports: features covering fashion shows in Paris, Milan, London, and New York between Spring 2000 and Fall 2018. The set included 670 fashion houses hosting at least two runway shows in this period, focusing on women’s prêt-à-porter designs.

Next, the researchers ran an analysis across the texts published by Vogue after each show. They coded words relating to the moral and ethical dimensions of fur use.

“When Vogue publishes a report, you don’t just get a review of the collections,” says Negro. “You also get the magazine’s opinion and appraisal of the clothing.”

Fur Ethics and the Decline of a Centuries-Old Industry

Parsing the attention to fur ethics expressed in these reports and looking at the frequency of the appearance of fur on runways over time, he and his colleagues found something striking: a clear, quantitative correlation between the magazine’s coverage of fur ethics and a drop off in its use by fashion houses, starting in 2011.

“From around 2009, Vogue starts referencing the ethical and social concerns around fur and this continues through to 2014.  In 2011, you begin to see a steady decline that follows in the use and appearance of fur on catwalks in the major fashion capitals of the world.”

But could this simply be credited to an increase in activism at the same time? Unlikely, says Negro. He and his colleagues also looked at data on media coverage of anti-fur events in France, Italy, the United Kingdom, and the U.S. and failed to establish any meaningful correlation with Vogue’s editorial position over the same period.

“What seems most plausible is that as an influential industry gatekeeper, Vogue was driving a change in views on fur ethics and fur use, alongside its own changing position on the ethics of fur,” says Negro.

And it’s interesting to remember that fashion, like other creative industries, tends to operate in accordance with its own set of rules and its ‘artistic freedom.’ When activists targeted Jean Paul Gaultier’s Fall Show of 2009, he simply announced that he loved fur and would continue using it. However, when Vogue starts weighing in with an opinion, that’s when designers start following suit.

Which isn’t to say that activism did not have a critical role, he adds. In leading and reshaping the conversation around fur over the last three decades, PETA and others have brought the key issues to the attention of the world’s media like no other, says Godart: “Our findings also suggest that specific forms of anti-fur activism such as advertising campaigns, and legal maneuvers, became effective in influencing fashion houses’ decisions to move away from fur when amplified by Vogue’sreferences to moral concerns around fur use.”

For any business or industry looking to navigate changing perceptions, tastes, or sentiments, gatekeeper entities–intermediaries like experts, media publications, and others–can provide useful signals that can help strategic decision-making, say Negro, Godart, and Hsu. Though in the age of social media, it may become that much more difficult to distinguish signals from noise. Proactive organizations might do well to identify and engage with social movements and gatekeepers ahead of change, they say, rather than bide their time until pressure forces their hand.

Goizueta faculty members challenge what business is today, and what it can be tomorrow. See how they push boundaries through cutting-edge research at Goizueta.