The rankings are out and Atlanta remains one of the top cities Fortune 500 companies call home.

In all, 10 Fortune 500 companies are headquartered in Atlanta. There are 12 in the metro area, three more are within a two-hour drive while an additional 15 are within approximately four to four-and-a-half hours of the city by car (map).

Companies in the Atlanta metro area include:

Aflac (Columbus, No. 125) and Mohawk Industries (Calhoun, No. 427) were also on the list. Georgia ranks 13th among the Fortune 500 for corporate headquarters. New York, California, Texas, Illinois and Ohio make up the top 5.

Goizueta has relationships with many local Fortune 500 companies.

In the past year, CEOs from Newell Rubbermaid and SunTrust Banks have participated in the Dean’s Leadership Speaker Series. Coca-Cola Chairman and CEO Muhtar Kent has also spoken on campus.

Delta Air Lines is also a founding partner of the Emory Marketing Analytics Initiative (EmoryMAC), which launched in in February. 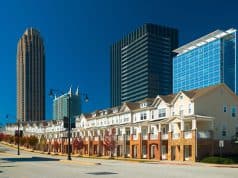