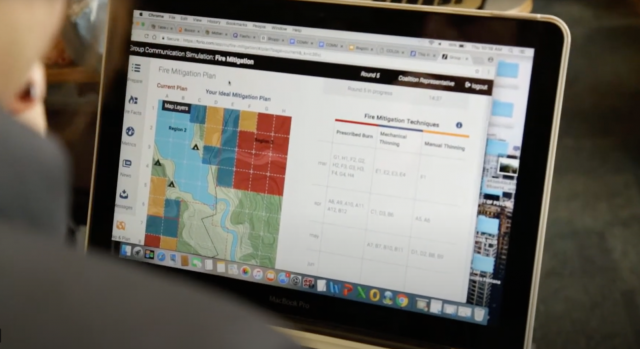 Learning by doing is one way to teach leadership skills, but it’s not the only way.

With the MBA programs’ annual Leader’s Reaction Course outing to Fort Benning postponed until the spring due to the pandemic, retired Lt. Gen. Ken Keen, associate dean for leadership at Emory’s Goizueta Business School, was challenged to come up with a suitable alternative. Keen, who has commanded Special Forces and Ranger operations for the U.S. Army, decided if the students couldn’t learn by doing, perhaps they could learn by “being.”

In lieu of the hands-on leadership course, students took on key roles as members of a wildfire mitigation task force in an immersive, decision-making simulation entitled “Group Communication and Decision-Making Simulation: Wildfire Mitigation.” This fall, Keen ran the simulation five times, for students in the MS in Business Analytics, Full-time MBA, Evening MBA, and Executive MBA programs. “Simulations have an important place in our experiential learning program,” noted Keen, adding that effective group work is a skill that will serve the students well in their careers. “The simulation won’t replace the experience we do at Fort Benning, but it will certainly augment it.”

Rules of the game

While taking part in the simulation, students play one of five members of a wildfire mitigation taskforce, each representing multiple stakeholders with different interests and goals. Set up to protect Westmount, a fictitious, small mountain town located outside a larger municipality, the task force is comprised of the town mayor, a representative of local business owners, a forest service district ranger, a regional representative of a national environmental organization, and the manager of the municipal water authority. The task force members are given a description of their positions as well as a list of ideal policy goals. The objective of the simulation is for students to work to understand each other, produce innovative solutions, and create an outcome that balances various stakeholder interests.

To prime the students for their wildfire mitigation task force roles, Keen led prep calls a few days before the simulations. During one of those calls, Keen explained to the students, “This isn’t about winning or losing, this is about how you come out with the best or worst solution for your community.” Under pressure, the students would need to negotiate, make tradeoffs, resolve conflicts, and decide how transparent to be when sharing their goals.

During one of the recent simulations, the members of Team One (out of six teams) introduced each other to their simulation characters. Kailash Lala 21EMBA, a computer software engineer in real life, would play Westmount’s mayor. Paula Harmon 21EMBA, an ear nose and throat doctor by day, would act as the regional representative of a national environmental organization. “Save the trees,” she said as she introduced herself. Real-life anesthesiologist Lyndsay Head 21EMBA was tasked with the role of municipal water authority manager. Allen Chapman 21EMBA, who spends his days as an air operations manager for FedEx, took on the persona of the forest service district manager. Brandon Campoy Willitts 21EMBA, who acted as a representative of local business owners in the simulation, spends his days as a cyber and strategic risk consultant for Deloitte.

Each team was assigned at least one coach—either a graduate of Goizueta, a member of the military, or both—to help the team stay on task. The coaches also led two “after action review” segments during the course of the simulation.

Each of the simulation’s five, 30-minute rounds represented monthly task force meetings that took place over the course of five months.

During each “meeting,” task force members worked through key decisions related to wildfire management, public safety, and environmental impact, then logged their decisions on a wildfire mitigation master plan map. While the goal was to reach a consensus around public policy, the task force members also had a set of individual goals that related to the wants of their stakeholders. During the course of the simulation, each task force member was peppered with emails from constituents, social media banter, and relevant news articles. The students also faced a number of twists and turns that would affect their decision-making.

Before Team One began the game, the coaches, Ashley Freeman 18EvMBA, founder, Flourishing Work, LLC, and retired U.S. Army Col. Ed House, imparted advice. Freeman noted, “The more realistic you make it, the better it will go.” As the team members attempted to get comfortable in their roles, they struggled to find a rhythm. Before the team members could agree on a policy for the area covered in round one, the round came to a close. “If we’d spent that time [in round one] laying out what we were all going for, that would have given us a more cohesive approach to the problem,” said Head during the team’s final after action review. “I had a handful of must wins. There were some areas where it was okay if I didn’t get it. In the first round, I could have been straight forward with my absolutes.”

As the team members got more comfortable in their roles, they began to better understand what motivated the characters they were playing and each other. “The trust was building,” said Lala. Initially, the team members kept information to themselves, but as time went on, they became more transparent.

“We had to negotiate and compromise and deal with transparency,” said Allen. “It was a balancing act between the two—and knowing when to tie in that transparency.”

“Knowing where people are coming from—it’s the secret sauce,” said House. “Try to meet them in the middle. If you can’t find compromise, then everyone is going to be unhappy.”

Freeman explained that awareness about whether it’s a collaborative or competitive negotiation is key to how transparent to be. “Ideally, everyone would collaborate,” she said. “It’s about self-awareness and reading the room.”

“One of the things I’ve been trying to strive toward is transparent leadership,” said Willitts. “I think the worst leaders hoard information.”

After the individual teams’ final after-action review, all six teams reconvened with Keen for an overarching review. The transparency/trust theme carried into the group discussion. Chris Adams 21EMBA, a member of Team Two, thought the simulation was a great reminder, when working in groups, to step back from the urge to be competitive and move toward collaboration. “When you start getting competitive, you can feel the wheels start to fall off,” he said.

Corina Bravo Rivera 22MBA, who participated in the simulation from her home in Venezuela, noted that the five members of the task force were all peers. “What happens when there is a power imbalance?” she asked. Keen suggested reminding the person with the power about the common purpose of the endeavor. If the person in power uses his or her leverage to work against a core value or common purpose, it’s best to anchor arguments “to the core values or core purpose,” Keen said.

Hina Arora 22MBA, who joined the exercise from her home in India, noted that her group worked best once the task force members began to “trust the others’ expertise.”