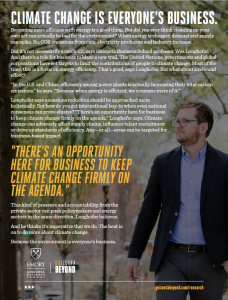 The UN international treaty on climate change dominated the headlines in 2017.

President Trump caused consternation for some, celebration for others, when in May he pledged to withdraw the U.S. from the Paris agreement. The stringent targets on carbon emissions, said Trump, would hurt the American economy. We’re all for energy efficiency, went the argument. But not at the expense of U.S. jobs.

And there is plenty of support for Trump’s stance across the States and the global political and economic spectrum. Climate change, and the measures we use to address it, seems to have a uniquely polarizing effect.

On the one hand, there’s overt consensus that rising temperatures are a bad thing. And most people agree that the villain of the piece par excellence is carbon emissions from burning fossil fuels.

Yet for governments and pan-geographic organizations, trying to get everyone on board to do the right thing is fraught with challenges and pitfalls.

First off, in the global economy we’re all competitors. Trump argued that setting limits on emissions for U.S. energy manufacturers would only move energy production elsewhere to fill the demand gap.

Then there’s the energy sector itself, for which energy efficiency might not have economic appeal.

And then there are other, perhaps even thornier issues, related to energy efficiency itself that muddy the water on carbon emissions.

Wes Longhofer is an Assistant Professor of Organization and Management at Emory. Lately, along with his collaborators, he has been examining the “rebound effect” of energy efficiency.

Despite the Trump administration’s withdrawal from Paris, globally we are doing more than ever before to tackle climate change.  Energy efficiency is taking more of the center-stage politically and economically and countries along with corporations are keen to be seen, at the very least, to be cleaning up their act.

Great, says Wes Longhofer. Except that his research is shedding light on a rebound effect. And it works like this.

“Back in the 1860s, English economist William Jevons observed an interesting phenomenon: as energy became more efficient and coal got cheaper, the consumption of coal actually increased. And this rebound theory can be observed in energy efficiency measures today. If fuel is cheaper people often drive more. There’s your unintended consequence right there: consumers use more energy, generating more emissions, because the energy is cheaper,” says Longhofer.

“In the U.S. research is incomplete, but studies suggest that when fuel is cheaper, consumers use their cars more – they’ll go on vacation the weeks when gasoline prices drop, for example. In our research we are seeing that in some countries, when power plants become more efficient they do tend to produce more energy and therefore more CO2.”

So does the rebound effect automatically negate the positive benefits of energy efficiency? Longhofer says no – not yet.

“The rebound effect has potential to become a big problem if we only think about climate change in terms of energy efficiency. Targets need to be set both for energy efficiency and for overall emissions. If we’re producing so much energy that we are not meeting our overall targets then the investment is not going to be effective. So we’re going to want to push industry and regulators to think more broadly on climate change in terms of energy efficiency in the context of overall emission levels.”

But in the fall out of the Trump Paris withdrawal, securing collective consensus, let alone action, might seem like a very tall order indeed.

As Longhofer himself says, under Obama, clean power plant policies could only be set at a state level. National consensus on what those policies should be remained elusive.

“It’s a massive collective action problem. It’s not necessarily seen in the interests of any single actor – why should they want to reduce their emissions especially if it hurts their competitiveness?”

So is there an answer to the problem?

The current political climate in the U.S. suggests that climate change is not going to be a priority, says Longhofer. But companies have been “out there already trying to confront this problem long before policy makers were. And the reason why is that companies see it as a business challenge. The private sector has made the business case for sustainability and most of the Fortune 500 companies have climate change plans or strategies that they developed before the UN Paris Agreement.”

Many Fortune 500 companies are already:

While business is not – nor should it be – solely responsible for keeping climate change on the public agenda, Longhofer is heartened by “strong leaders in industry who have been vocal in making this a priority. There’s the RE100 group whose companies like Google and Ikea are committed to using 100% renewable energy. I think it’s exciting where you see this kind of voluntary agreement to basically hold each other accountable. They also see it as a source of competition that they voluntarily try to pursue. And every industry is beginning to jump on board.”

The private sector could lead the way, Longhofer believes.

As business cultures evolve to prioritize accountability, and as corporations respond positively to both peer and employee pressure, there’s a chance for the private sector to set an agenda and push policymakers and the energy sector itself in the same direction.

And he thinks it’s imperative that it does.

“The heat is kind of on to get serious about reducing carbon emissions. Because at the end of the day, the global climate is everyone’s business.”