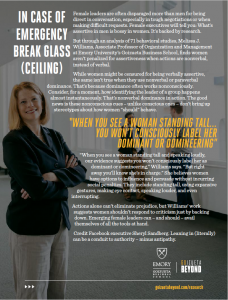 EDITOR’S NOTE: This piece was originally published in The Wall Street Journal.

This new finding opens up possibilities for women, who may feel they face a Catch-22 in their professional roles: being effective leaders without being penalized for being effective leaders. It certainly isn’t ideal—or fair—but by using these alternative expressions of leadership, women can sidestep the prejudices that make it hard to keep the respect and admiration of their team.

Significantly, in our analysis, assertive behavior didn’t lead women to be seen as less competent than men. Rather, the costs were limited to interpersonal qualities, such as likability or warmth. But of course, in business, being liked can be just as critical to success as being respected. “Difficult” people are unlikely to be invited to join projects, teams or boards. So, for women leaders, being disliked for being assertive can carry real career costs, not just social ones.

Nonverbal behaviors clearly enhance influence. People are more likely to follow the lead of a person who maintains eye contact with them while he or she speaks, compared with a person who doesn’t.