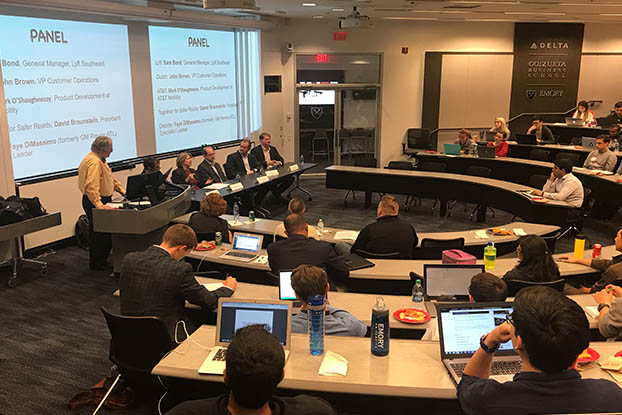 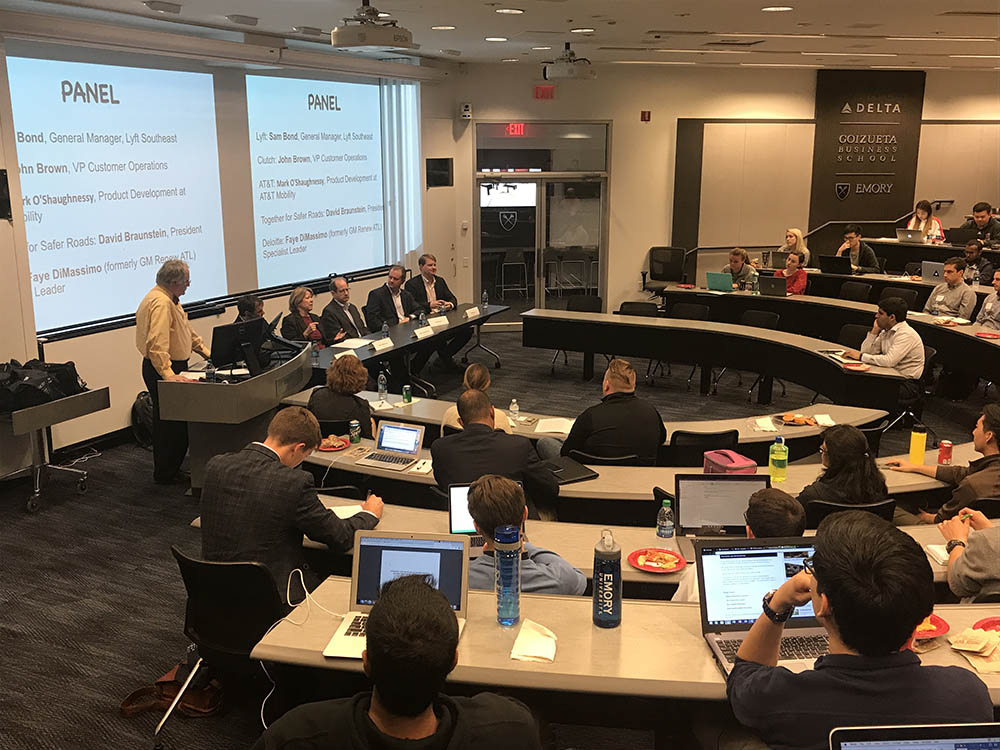 It may be a generation away, but there will be a day in our society when it’s a surprise that a human driver has arrived your door step. The lifestyle and cultural shift would move at a pace where leaving for work or meeting friends at a restaurant will be done almost exclusively with an autonomous vehicle.

But when will we move past that threshold, that transportation autonomy is no longer a novelty?

A panel of experts in the intersecting fields of automotive technology, safety, transportation and vehicle ownership met for a discussion moderated by Benn Konsynski, Goizueta’s George S. Craft Professor in Information Systems & Operations Management. The event in the Delta classroom was called “Mobility Futures: Connection-Communication-Cooperation.”

There was a wide range of topics addressed, and Konsynski said he focused on covering new business models and predictions for the future, along with security, new models of ownership, transport and structure changes.

Faye DiMassimo of Deloitte, previously the general manager of Renew Atlanta, has worked extensively with the City of Atlanta to solve traffic and safety issues in busy corridors, such as from Ponce City Market to Georgia Tech.

“If we’re really going to harness emerging technology to solve our problems, then we’ve really got to think about it in a far more systematic way, an inoperable way than is really traditional for most cities,” she said.

The mobility reality of the 21st century appears to be a convergence of public-private partnerships, optional human drivers and lifestyle and cultural shifts that are expected to dramatically change how people move around their city.

Konsynski reminded the audience that, “we tend to overshoot on our near-term predictions, and undershoot on the long-term.”

David Braunstein, who is president of Together for Safer Roads, said there needs to a cultural shift to significantly improve a transportation system where annually, more than 30,000 people die.

“It is a very entrenched cultural issue, and there is a lot of messaging that comes at us every day that says, ‘Drive fast, it’s OK to drink, use your phone,’” he said. “All these things are competing for our mindshare and what we do on the road. We’re, quite frankly, not dealing with it very well.” 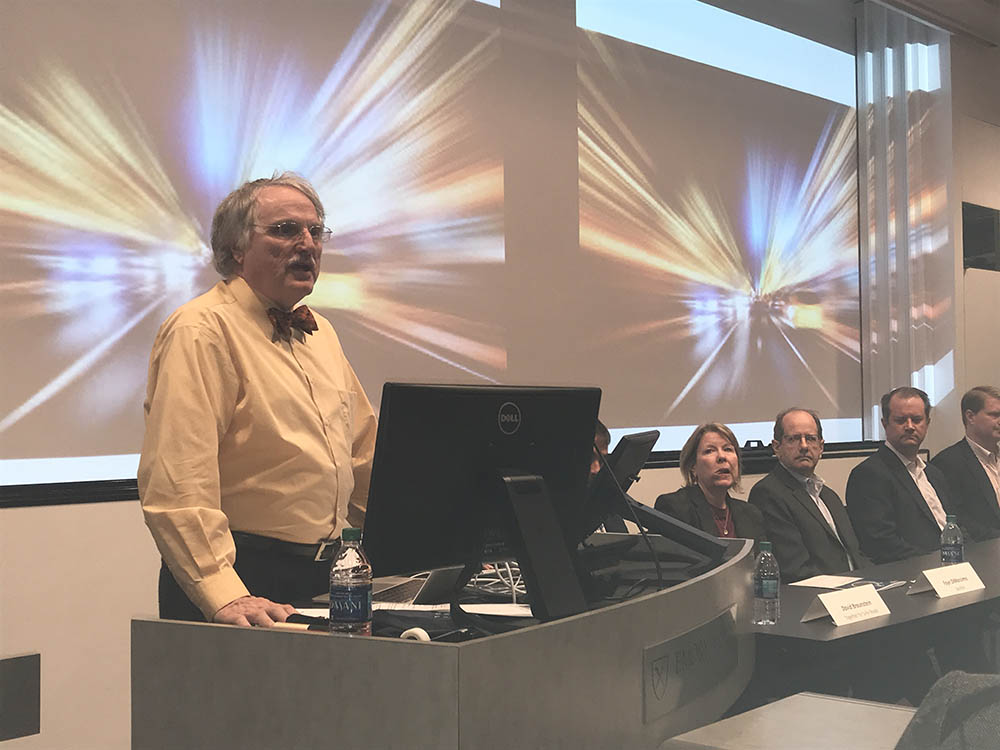 One piece of the safety puzzle is the arrival of 5G and the Internet of Things, which would make it easier for intelligently connected devices and systems to share data about traffic flow, highway speeds and pedestrians in a given area.

Mark O’Shaughnessy, who works in product development at AT&T, spent more than two decades of his career working for car manufacturers. O’Shaughnessy said 5G will have a greater reach and a lower latency than even 4G LTE.

“Once you start to connect the cars, and you get sensors in street lights and sensors in other places and networks where cars can switch off really quickly from one network to another, there’s no latency, then you can start to make decisions about what’s going on, almost in real time,” he said. “It’s the connectivity and low latency that goes together with all the other cloud platforms that are being built. We’re on the verge of being able to make some pretty real-time decisions as 5G starts to really penetrate some of the inner cities.”

Those technology upgrades give way to other lifestyle choices, such as Clutch, a monthly subscription service, or rideshare companies like Lyft, which would allow a family like Sam Bond’s, general manager of Lyft Southeast, to have just one car.

John Brown, vice president of customer operations with Clutch, said his company helps mitigate the idea of being in a car for several years, of being a “vehicle general contractor,” and offers freedom and experiences they wouldn’t otherwise have.

Bond sees these issues as an evolution of consumer preference and utilization of assets in a smarter fashion. However, the pay-as-you-go model often depends on usage patterns.

“If getting rid of some of the time tax … if a subscription or concierge can take some of that pain off, the next best thing is to basically be able to walk away entirely from any burden on a fixed asset like a car,” Bond said. “If you get around town on Lyft, and you happen to go on vacation, or out of town for four weeks, you’re not sitting on an underutilized asset in the form of a car payment, or insurance payment while you’re gone.”

Today, there is a system of mobility that results in some 32,000 deaths a year and our days are shortened by at least an hour in frustrating distraction from our interests, Konsynski said. In the end, we seek a safe system of mobility that enhances our life, rather than consuming our free time, exposing us to risks that need not exist. Mobility futures involve new systems of technology, ownership and social interaction.