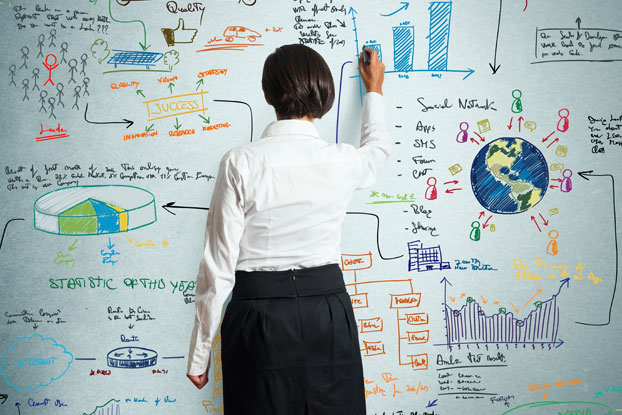 A significant marker of a leading business school is the creation of new knowledge. Goizueta faculty, using rigorous methodologies, focus on researching important problems that affect the practice of business. The following is a sampler of recently created new knowledge. To learn more, please visit goizueta.emory.edu/faculty.

The human brain and stock earnings

In pioneering research, Jan Barton, associate professor of accounting, and Emory neuroscientists Greg Berns and Andrew Brooks examined how the human brain processes accounting information, specifically corporate earnings announcements. The study participants acted as investors, first by forecasting the earnings per share of 60 real publicly traded companies, and then by taking an investment position in the companies’ stocks. Participants’ brains were then scanned in an fMRI machine while they learned the companies’ actual earnings. Barton and colleagues found that dopamine neurons deep in the investors’ brains encoded surprises associated with the earnings announcement. They also found that activity in study participants’ brains predicted Wall Street’s reaction to the earnings news—both abnormal stock returns and trading volume around the earnings announcements were strongly correlated with the intensity of the reaction in the participants’ dopamine neurons. The researchers show that how an investor’s brain processes earnings news seems to depend on her personality traits, the investment position she holds in the company’s stock, and the predictability of the company’s earnings. The Accounting Review (2014).

In research from T. Clifton Green, associate professor of finance, and Russell Jame 10PhD (Gatton College of Business and Economics), the duo found that publicly traded companies with names that are easier to pronounce, a bit more familiar to investors, and shorter in length enjoy increased investor recognition and firm value. The researchers used a number of criteria for their “name fluency” test, citing the use of  English words, the appearance of the company name in the dictionary, the frequency of  letter clusters familiar to English language word patterns, and shorter company names. As name fluency increased, so too did the likelihood of retail investors and mutual fund managers owning the company’s shares. The companies with more fluent names also saw an uptick in liquidity and higher market valuations on common stock. Journal of Financial Economics (2013).

Employees’ commitment to an organization is influenced by whether they believe company decision makers are being fair and whether they receive favorable outcomes. According to research from Emily Bianchi, assistant professor of organization and management, and her coauthors, the notion of fairness in the workplace and its impact on employee commitment to an organization is a bit more complicated than that. Using data from actual work experiences as well as responses to a variety of hypothetical vignettes, the researchers found that reactions to fairness information depended largely on how much employees trusted the organization. When employees had a high level of trust in an organization, commitment was low when the study participants experienced unfair outcomes and unfair procedures. However, when employee trust in the organization was low, commitment was high when the study participants experienced fair outcomes and fair procedures. Personality & Social Psychology Bulletin (2015).

The dramatic increase in US trading volume has transformed the market. Given the historic jump, Ilia D. Dichev, Goizueta chaired professor of accounting, and co-authors Kelly Huang (Florida International U) and Goizueta doctoral candidate Dexin Zhou sought to investigate the impact of high trading volume on stock volatility. The trio examined several settings, including matched ETFs and dual-class stocks, the aggregate timeseries of US stocks since 1926, and the cross section of US stocks during the past 20 years. The research revealed that trading-induced volatility makes up about a quarter of total observed stock volatility today. The study draws special attention to the consequences of increasing trade-induced volatility, specifically the possibility of destabilization of the market. The researchers also ponder whether or not it might be appropriate for market makers and regulators to act proactively in dealing with the impact of high trading volume on stock volatility. Journal of Accounting, Auditing, and Finance (2014).

Technological advances have allowed companies to offshore work to emerging economies. While the practice has led to a reduction in costs, there are communication difficulties that can result between employees and superiors when they are spread across the globe and dealing with language, cultural, and time zone differences. Anandhi Bharadwaj, professor of information systems and operations management; Deepa Mani (Indian School of Business); and Kannan Srikanth (Singapore Management University) investigated more than 130 offshore captive centers owned and operated by multinational corporations to understand the technology-enabled coordination strategies needed to make captive centers work better. The trio studied two work strategies: modularization and information sharing. Modularization requires an organizer to give direct instruction to employees; there is little employee interaction. The information-sharing model requires employees to work together and communicate often with one another. The research indicated that the modularization of work is ineffective if the jobs performed are unfamiliar, less routinized, and less analyzable. Instead, information-sharing is a better option when employees are engaging in new assignments and duties. Information Systems Research (2014).

Evaluating the appropriateness of accounting choices requires the application of greater judgment when standards are less precise. Consequently, as accounting standards become less precise, US auditors are concerned that they face the risk of increased second-guessing of their decisions and greater legal liability. Kathryn Kadous, professor of accounting, and coauthor Molly Mercer (DePaul U) investigated this possibility by designing an experiment in which participants acted as jurors in a mock auditor negligence case. Kadous and Mercer determined that less precise standards led to more second-guessing of auditor judgments when the client’s accounting choice was fairly conservative. However, when the client’s reporting was aggressive, this did not occur. In fact, jurors were overly lenient with auditors who allowed aggressive reporting under imprecise standards. The results indicate a need for tools to improve jurors’ ability to evaluate an auditor’s reporting decisions under imprecise standards. Auditing: A Journal of Practice and Theory (2014).

Given the health risks associated with smoking, researchers are working hard to better understand the demographics of smokers and those more likely to quit. Furthering the field of study, Michael Lewis, associate professor of marketing and doctoral area coordinator; Carla J. Berg (Emory University Rollins School of Public Health); and Yanwen Wang 14PhD (U of Colorado Boulder) investigated how cigarette preferences impacted the decision to stop smoking. The trio also looked at the type of smoker more likely to quit. Using demographic data, they found that cessation rates among menthol cigarette smokers, particularly in the African-American population, were much lower than that of non-menthol smokers. Households with single men were much less likely to quit than mixed gender households. However, smokers who opted for lower nicotine cigarettes and smokers who purchased lower quality premium cigarettes were more likely to quit smoking. The researchers defined cessation of smoking as a smoker who had not purchased a pack of cigarettes for at least one year. Preventive Medicine (2014).

Given the ever-increasing amount of work that is accomplished by teams, understanding how teams work and figuring out ways to increase their effectiveness in organizations has become even more relevant. In new research on the subject, Jill E. Perry-Smith, associate professor of organization & management, and coauthor Christina E. Shalley (Georgia Institute of Technology) investigated informal social networks established outside of the team and how those may inform the abilities of individual team members and their work inside the team. Results of a study of 82 long-term MBA project teams suggested that when individual team members have nationality-heterogeneous outside contacts that are weak rather than strong, team creativity is higher. The two note that strong ties usually involve people who are similar in some way. Weaker outside ties are more likely to provide a differing perspective and thus facilitate creative thinking. Notably, diverse outside ties helped teams be more creative regardless of how diverse the actual team was. Organization Science (2014).