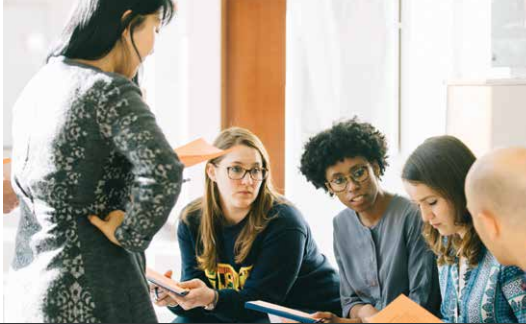 In the fall semester, students are immersed in Goizueta IMPACT’s core curriculum—courses and casework specifically designed to build the foundational skills necessary to excel in any area of business and to learn a structured approach to solving those messy problems. In the spring semester, students apply their newly minted practical skills to real world, ambiguous problems on behalf of clients such as Delta Air Lines, The Home Depot, Porsche Cars North America, Kimberly-Clark, Mailchimp, nonprofits, and community organizations. “The IMPACT project was a fantastic way to leverage everything we’d learned the previous semester,” said Sharma.

For Spring 2021, 26 MBA teams and six BBA teams worked on a total of 23 real-world projects for 18 different sponsor companies. To earn a spot in the Showcase, each team gave a three-minute “elevator pitch” that outlined their project recommendations. Pitches were recorded and all students were randomly assigned six videos to watch and respond to a question. The top 14 teams presented their final client recommendations to more than 250 judges (a mix of alumni and business leaders), who identified the top three teams and crowned the first-place team “Goizueta Gold.”

Like last year, 2021’s Showcase took place online, albeit with a few new features. Industry and “mini-reunion” breakouts were added to the schedule to enable alumni to connect. “It was our way to mimic running into your classmates on campus,” said Kore Breault, program director, Goizueta IMPACT. Showcase organizers also introduced “Goizueta Greats,” 10-minute, TED-like talks by Goizueta faculty “to give something back to the project sponsors and judges who were giving so much to us,” added Breault.

Sharma, along with Zad Adloo 22MBA, Kegan Baird 22MBA, Cesar Castro 22MBA, and Matthew Mastriforte 22MBA, captured “Goizueta Gold” on behalf of Goodwill of North Georgia. The non-profit had tasked Sharma’s team with exploring the feasibility (and building a business plan for the potential launch) of a joint venture between it and a non-profit staffing company. “We all trusted each other and we worked so hard for the client,” Sharma explained. “I learned so much from my incredible team. I already know that I have really strong friendships going into second year.”

A faculty advisor worked closely with each team to ensure it was on the right track and had the resources it needed. Jeff Rummel, associate professor in the practice of Information Systems & Management worked with Sharma’s team. Teams also had a second year IMPACT Coaching Fellow—a student who completed the Goizueta IMPACT project the prior year. Willie Sullivan, 21MBA worked with the first-place team. Elizabeth Hitti 21MBA, who will join Georgia-Pacific in a strategy role this July, worked with the second place team (Rachael Augostini 22MBA, Jessica Lewis 22MBA, Jonovan Sackey 22MBA, Nainika Sehgal 22MBA and Sam Wang 22MBA) and third place team (Julia Dong 22MBA, Brandon Makinson 22MBA, Kyle McLain 22MBA, Zachary Nusbaum 22MBA and Jakob Perryman 22MBA), both of which had been assigned Georgia-Pacific projects. Saloni Firasta Vastani, associate professor in the practice of marketing, served as faculty advisor for the Georgia-Pacific teams.

Hitti’s two teams had very different working styles. One team addressed the project much like Hitti, who was a consultant at Deloitte before coming to Goizueta, would have. The other team took a different approach. “There came a point where I was like, this isn’t how I would do it, but they’re doing well,” she explained. “That mindset shift was great for me. Sometimes you can learn more from the teams that do things differently.”

Each team was allotted 25-minutes for its Showcase presentation, and another 20 minutes for Q&A. The final scores were tabulated based on the team’s problem solving and recommended solutions as well as the team’s delivery, ability to communicate ideas, storyline, slide deck, and how it managed the Q&A.

For the last 10 years, Carrie Schonberg 97C 03MBA has attended the IMPACT Showcase as a judge. “The Showcase is one of the events I most look forward to each year,” said Schonberg, who enjoys re-connecting with faculty and staff (many of whom were at Goizueta when she was a student). During her time at Goizueta, Schonberg, chief marketing officer, Ashton Woods Homes, competed in Goizueta Marketing Strategy Consultancy, or GMSC, the precursor to Goizueta IMPACT. “These projects are a great way for corporations to get a different level of insight and perspective than they would get from people in their own company,” she said.

Kevin Kyer 05MBA, who lives in Geneva, Switzerland, was happy to be able to take part in the both the 2020 and 2021 virtual Showcases. Kyer, Hatch CoLab’s executive-in-residence and a self-described digital transformation leader, hopes to see a permanent, “hybrid type” way for alumni who can’t be on campus to attend the Showcase online. “It expands the experience to make it available to more people and to have their feedback,” Kyer explained. “It’s a great way to connect better and learn more.”

In addition to his role as a judge, Kyer joined a mini-reunion and dropped into a Goizueta Greats session, of which there were five. Omar Rodríquez Vilá, associate professor in the practice of marketing and academic director of education at The Roberto C. Goizueta Business & Society Institute gave a talk titled, “Towards a definition of an anti-racist brand: concepts, actions, and tools to advance the practice of racial equity in the marketplace.”

Other topics included “Startups and big companies: ‘It’s complicated,’” given by Amelia Schaffner, director of entrepreneurship, The Roberto C. Goizueta Center for Entrepreneurship & Innovation, and “Revolutionizing finance by valuing your customers,” presented by Daniel McCarthy, assistant professor of marketing. Erika Hall, assistant professor of Organization & Management and faculty advisor at The Roberto C. Goizueta Business & Society Institute, talked about “The effect of the racial labels African-American and Black on societal and organizational outcomes,” and Wes Longhofer, associate professor of Organization & Management and executive academic director at The Roberto C. Goizueta Business & Society Institute, discussed his most recent book, Super Polluters: Tackling the World’s Largest Sites of Climate-Disruption Emissions and what it tells us about our energy system and the future of the planet.

Listen to the Goizueta Effect Podcast on “Reimagining Business as a Catalyst for Social Change” with Wesley Longhofer.